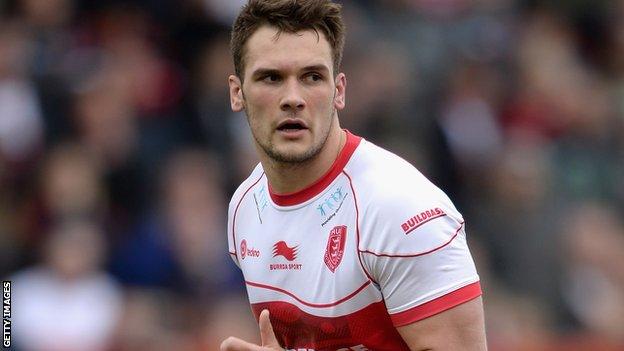 Griffin, 21, featured 10 times for Rovers last season and appeared for Championship One side Gateshead.

He spent two years with Hull KR after joining from Queanbeyan Kangaroos.

Back row Matt Cook, winger Kieran Dixon and prop Olsi Krasniqi are among the dozen players who have signed new deals with the club.

As far as recruitment, we're the strongest players in the market at this unusually late time

Saeed Agboke, Mason Caton-Brown, Erjon Dollapi, Will Lovell, Iliess Macani, Mike McMeeken, Joel Wicks and James Woodburn-Hall have also agreed to stay with the Broncos, while half-back Mike Bishay has re-signed after announcing his intention to leave the club in November.

The Broncos will play their home games at The Hive this season after agreeing a groundshare with Barnet FC, which will also see them train at Underhill.

With Dixon still sidelined following surgery on a knee injury, the club are expected to announce further signings in the coming days.

Winger Denny Solomona is set to move to the capital, pending a successful application for a visa, after the 20-year-old left NRL side Melbourne Storm.

"There are some adjustments, but these can make you stronger and tougher," Broncos head coach Tony Rea said.

"As far as recruitment, we're the strongest players in the market at this unusually late time. The players out there are hungry."