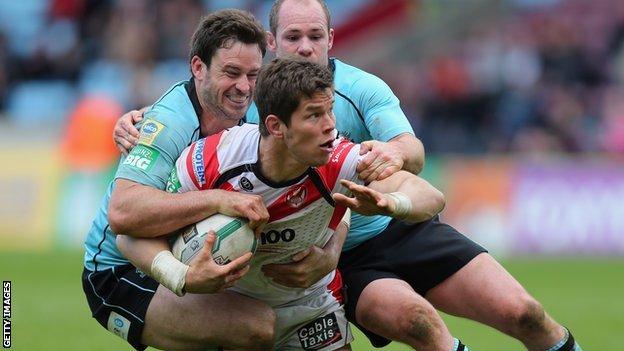 St Helens prop Louie McCarthy-Scarsbrook says the players are aiming to bring back the "glory days" to the Super League side.

Saints have not won a trophy since 2008, when they defeated Hull FC in the Challenge Cup at Wembley.

"The aim of the game is to challenge for the cups," McCarthy-Scarsbrook told BBC Radio Merseyside.

"Hopefully we can win some silverware this year as we have not won anything for a while."

The club have won 12 titles and 12 Challenge Cups in their history, but recent successes have been hard to come by.

Having appeared in the Grand Final nine times, more than any other club, their last triumph came back in 2006.

"This team and staff are raring to go and chomping at the bit to win something," he said.

"We have a good pack, one of the world's best number nines so hopefully we can do well.

"We are looking to bring back the glory days to St Helens and put some trophies in the cabinet at Langtree Park."

The losses of experienced pair Tony Puletua and Francis Meli to Salford means Brown has brought in Luke Walsh and Mose Masoe from Penrith,Richard Beaumont from Hull KR and Kyle Amor from Wakefield.

The Lewisham-born forward feels the new signings can do well at the club.

"There is competition everywhere at the club this year so I am looking to try and cement my place in the team," added McCarthy-Scarsbrook.

"We lost some key players last year but we have the youngsters and brought in replacements that look sharp and who can flourish."