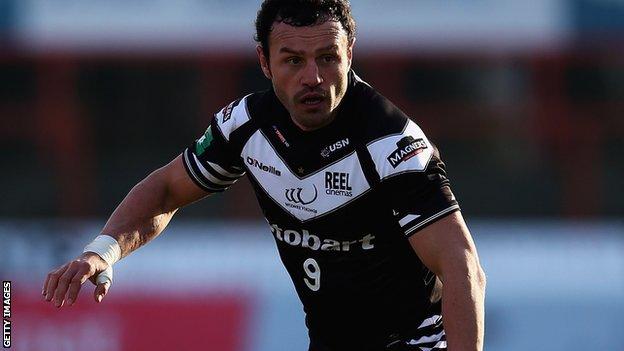 Widnes captain Jon Clarke says he is excited about the "togetherness" of the squad ahead of the new season.

The Vikings finished 10th in Super League last season, having been bottom of the table the previous year.

We want to make the play-offs, that is our goal and it is no secret

"I can feel there is a difference amongst the squad in terms of confidence and camaraderie," Clarke, 34, told BBC Radio Merseyside.

"There is a better feeling about the place, a togetherness and I am excited about the forthcoming season."

The side's preparations for the new campaign are well under way, with head coach Denis Betts' senior players returning early for pre-season prior to their first game against London Broncos in February.

And Clarke is confident they can improve on last season, despite the loss of experienced forwards Gareth Hock and Ben Cross.

"We have a great blend in the squad and are in a strong position this year," he said.

"The senior players have seen that we need to improve again this year. We can't think 10th is good enough.

"We want to make the play-offs, that is our goal and it is no secret."

Hooker Clarke is about to start his 18th season as a player, having previously appeared for Wigan Warriors, London Broncos and Warrington Wolves.

He says he is "loving it" at the club, who were granted a three-year Super League licence in 2011.

"I was fortunate to play at Warrington for a long time with some great lads and coaches, but the group of players we have here are very close and tight-knit," he added.

"Everyone is brilliant, there are no cliques, no egos and everyone is striving to do the same thing which is get better and it is great to know you are coming to work every day with a smile on your face."