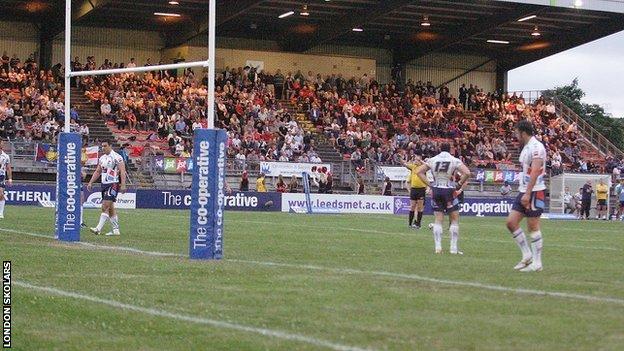 The company that controls the Skolars' White Hart Lane home in north London want to install the 4G surface.

"The plan is to dig up the in-field and lay a state-of-the-art 4G pitch, which will be ready before the end of the season," Skolars general manager Howard Kramer told BBC London 94.9.

"We'll also have new floodlights and a great facility for supporters to come and watch rugby league in London."

It means the club will have to play some of their home games away from their current Harringey base.

Possible options include using one of the facilities currently being used by London Broncos, who share The Hive with Barnet FC and train at the Conference club's former ground Underhill.

"It's certainly one of the options we're looking at," said Kramer. "It's a natural one. We're delighted the Broncos aren't too far away. Underhill is only 15 or 20 minutes away.

"We're speaking to them and also a few other people who are really interested in hosting some Skolars games.

"I can't say too much at the moment but we've spoken to three or four places where we might move three or four of our home games.

"We will play some games here and don't want to inconvenience supporters, so we're looking for a solution which is as near the ground as possible.

"It's going to be a bit of an inconvenience for us but we're going to end up with a fantastic playing surface."

Widnes became the first Super League club to lay an artificial pitch, in 2012, when they moved into the Stobart Stadium.