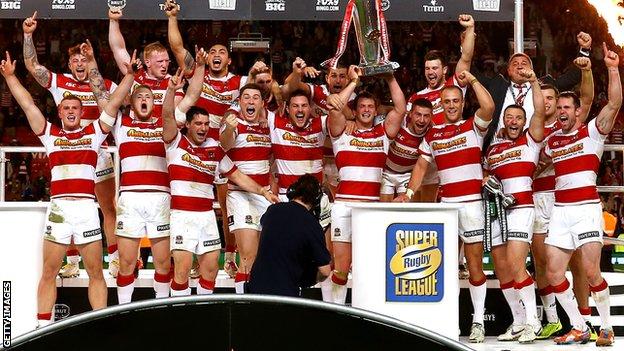 Wigan head coach Shaun Wane says he is not sure bringing back promotion and relegation will improve Super League.

The Rugby Football League announced that the top two divisions will run with 12-team leagues from 2015.

"I am very much one for our youngsters being promoted. I want to make sure clubs are encouraged to play the kids," Wane told BBC North West Tonight.

"With the new structure, I am not sure it is going to work that way but that is my only concern."

Top-flight clubs face the risk of dropping into the Championship for the first time since 2009, with plans to scrap the licensing system that was introduced five years ago.

And Bradford Bulls coach Francis Cummins said the idea to bring back relegation was a "rubbish" one.

Wane admits that he has to accept the ruling and is pleased with his squad going into the new season, despite star man Sam Tomkins moving to New Zealand Warriors for a world record fee.

"They have made their decision and I will deal with it," said Wane. "But I am confident going into this year.

"I am happy with the players we have signed, they are quality and they are young. Hopefully they stay with us for years to come.

"Everybody can be replaced. Sam is a great player, there is no doubt about that, but we have Matt Bowen now.

"It was sad losing him but we have some quality in our team and Matt will surprise people next season."

Having won the Grand Final and Challenge Cup double last season, captain Sean O'Loughlin feels the side have a difficult task in the 2014 campaign.

"There is probably a little bit more pressure on us now," said O'Loughlin. "We won the double last year and I think it is something the squad is relishing.

"We could have easily sat back on our laurels in pre-season but it has been tough and the new lads have jumped into training and the work ethic we have."