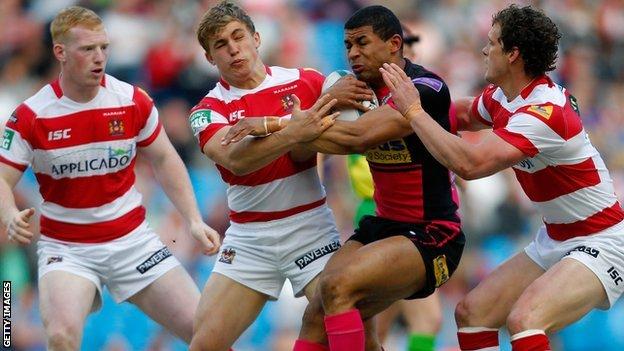 Last season's Grand Final winners Wigan will face Leeds on the first day at the Super League Magic Weekend in May.

The Warriors beat the Rhinos 20-16 at last year's event.

The showpiece meeting, which is being held at Manchester City's Etihad Stadium home for a third time, kicks off at 12:30 BST on Saturday, 17 May with London Broncos v Catalan Dragons.

Widnes v Salford and Hull FC v Hull KR are the other fixtures scheduled for the first day.

Sunday's action sees derbies between Wakefield and Castleford and Huddersfield and Bradford before culminating in Warrington v St Helens.

Plans last week to restructure Super League from the start of the 2015 season suggested that Magic Weekend was likely to remain after the competition had been trimmed back to 12 teams.