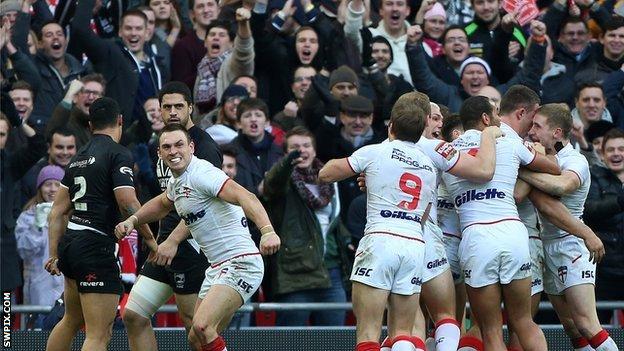 Huddersfield Giants coach Paul Anderson says clubs have a duty to build on the success of last year's World Cup in the new Super League season.

The tournament, which was won by Australia in a one-sided contest against New Zealand, attracted large crowds and positive feedback.

Anderson's side kick off the new season at Wigan on Friday.

"As a sport we have to keep on improving ourselves," the 42-year-old told the Super League Show.

"That means building on the back of last season's Super League and the World Cup, both on and off the field.

"We need everyone connected with the game to keep pushing boundaries."

Anderson led the Giants to the League Leaders' Shield last season, the first time they had headed the top flight in 81 years, and he believes is squad is capable of repeating their level of performance this term.

"We've got to put ourselves in the same position as last year and, when we get there, we've got to do better," he added.

"Last season we made sure that every day we came to work, we were the best we could possibly be. That is what gave us our success on the field.

"We want to be playing in big games and winning them. We believe we're capable of something special and what we have to do now is prove that."