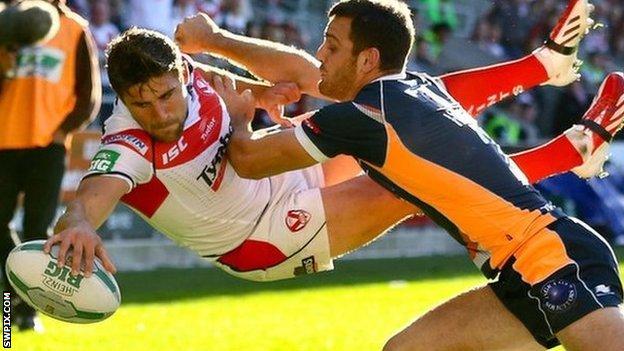 The BBC's Super League Show is back for a 16th series on Monday, 10 February.

This season there will be more shows than ever before, with 29 episodes.

The programme will feature the best of the action from each round of Super League's regular season and, for the first time, highlights from the fourth and fifth rounds of the Challenge Cup.

The show will be broadcast on BBC One in the north of England every Monday evening around 23:15 GMT, and repeated on BBC Two across the UK the next day.

Super League Show presenter Tanya Arnold said: "It's great to be back for what promises to be an exciting season at both ends of the table.

"It's a big year for the sport, as it bids to build on the success of the World Cup and with two teams being relegated from Super League there's a lot on the line."

As well as the on-field action there will be reports on current issues in the game plus interviews with the big names in the sport.

Top players and regular BBC pundits including Jamie Peacock, Eorl Crabtree, Robbie Hunter-Paul and Brian Noble will join Arnold in the studio to analyse the action and debate the issues.

Viewers will also be able to watch the show on the BBC iPlayer for one week after each broadcast.