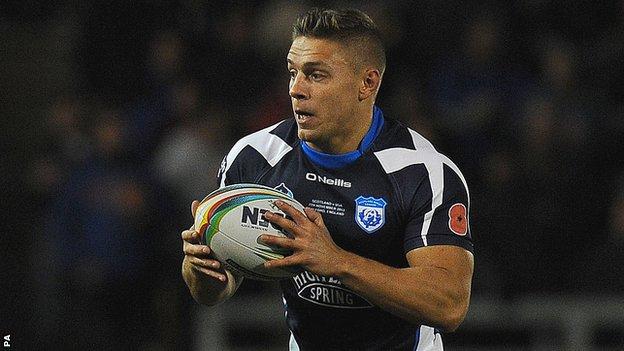 Full-back Matty Russell is confident he can make an impact at new club Warrington Wolves and fill the void left by Brett Hodgson's retirement.

Scotland international and former Wigan youngster Russell is back in Super League after spending a year playing in Australia with Gold Coast Titans.

The 20-year-old told BBC Radio Merseyside: "It is a lot of pressure but I'm sure I can deal with it."

Hodgson was named Man of Steel in 2009, his first season in Super League with Huddersfield, and played for the Giants in that season's Challenge Cup final defeat by Warrington.

After joining the Wolves in 2011, the full-back won the Challenge Cup the following year and also helped Warrington to two Grand Finals, although he did not feature in the 2013 defeat by Wigan.

Hodgson, who was voted Super League's Man of Steel in 2009 while with Huddersfield Giants, helped Warrington to the League Leaders' Shield in 2011 - his first season with the Wire.

A Challenge Cup victory followed in 2012, and he also featured in that year's Grand Final defeat by Leeds Rhinos at Old Trafford, but the 35-year-old has now retired from playing and recently took a coaching position at Widnes.

Russell, who has been struggling with an ankle injury during pre-season, believes his time in Australia and the chance to play for Scotland at the 2013 World Cup have helped him become a better player.

"I thought it would be a good chance to experience something else and maybe get out of my comfort zone for a year or so," he said.

"It developed me as a person because I learned a lot of skills, and just looking after myself because I was living on my own out there for a year.

"That extra year has helped me a lot, and even at the World Cup I realised that I'm a better player. I don't know what it is - perhaps just that extra year's training under my belt."