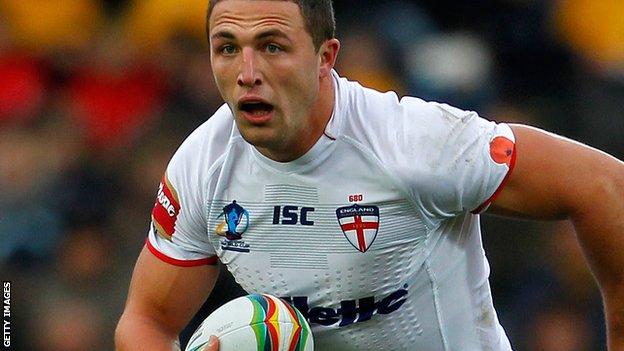 England league international Burgess, 25, is in talks with union side Bath.

"He's certainly a fighter and a warrior. He's very similar to the likes of Billy Twelvetrees and Manu Tuilagi."

Burgess currently plays for Australian side South Sydney Rabbitohs, where he is contracted until 2016, but it is understood the Rugby Football Union (RFU) are willing to buy out his remaining two years.

It has been reported that Burgess would be signed with a view to playing in the 2015 World Cup.

However Farrell, himself a rugby league convert, believes that would be difficult.

"It's a tough ask, but some people can take to things more quickly than others," he added.

"Mentality-wise you're trying to get ready for a battle, especially at international level, but the game does take some time to get used to as far as instinct is concerned.

"I'm not saying that somebody of the calibre of player we are talking about couldn't."

Burgess moved down under in 2009 but came back to prominence in his homeland during the 2013 Rugby League World Cup, putting in a number of aggressive performances as England reached the semi-finals.