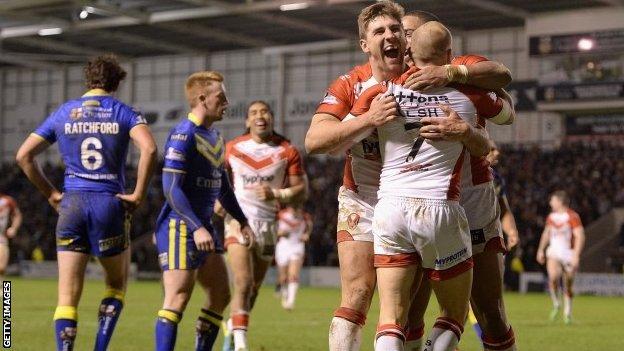 Joel Monaghan put the Wolves, beaten Grand Finalists in 2012 and 2013, in front with the first of his two tries.

But debutants Kyle Amor and Luke Walsh were among six scorers for Saints, who dominated thereafter.

St Helens, hammered by Huddersfield in their opening game of 2013, have won on their past four visits to the Halliwell Jones Stadium

Many expect Saints, badly depleted by injuries for much of last season, to compete for honours this term.

And in winning so convincingly against one of their main rivals, Nathan Brown's men showed they are more than capable of ending a trophy drought that stretches back to 2008.

Warrington, meanwhile, are in a period of transition following the departures of several experienced players since their Old Trafford defeat by Wigan in October.

On a night they celebrated a decade at the Halliwell Jones Stadium, they struggled to make any sort of impact on the match after winger Monaghan's second-minute try.

Saints soon responded through Makinson, a score created by Jordan Turner's excellent offload, and they extended their advantage when England hooker Roby darted over from close range.

Walsh, who successfully kicked all seven of his attempts at goal, struck a 40-20 to set the platform for prop Amor to power his way over the line and give the visitors a 16-point lead at the break.

The Wire could feel aggrieved at still being up against 13 men at that stage, with St Helens forwards Sia Soliola and Jon Wilkin being penalised - but escaping further punishment - for high hits in the closing stages of the half.

Laffranchi's powerful score under the posts effectively ended the game as a contest and, although Monaghan touched down for a second time, Saints' lead never came under any real threat.

Instead, they sealed the game in style as Swift dived in at the corner and Walsh capped an impressive first display with a breakaway try.

"Our kicking game was right up there with one of the worst we've had for a while. We got out-kicked and around the ruck area we weren't great.

"In the first half both teams competed pretty well. In the second half they were way better than us. There was too much panic. We were chasing the game instead of having patience.

"It was a bit of a kick in the backside for us. Saints were terrific. They got on a roll and did all the little things well."

"Warrington have been so successful for so long so to get the result was pleasing.

"We're really rapt with what the guys did but we're certainly not going to get carried away. It's a good start but it's about consistently doing well.

"Walshy had a lot of good contributions for us, built on the back of some of the forwards' work.

"I thought our game management in the second half was actually quite poor but it's clear to see what Walshy can bring to the team."