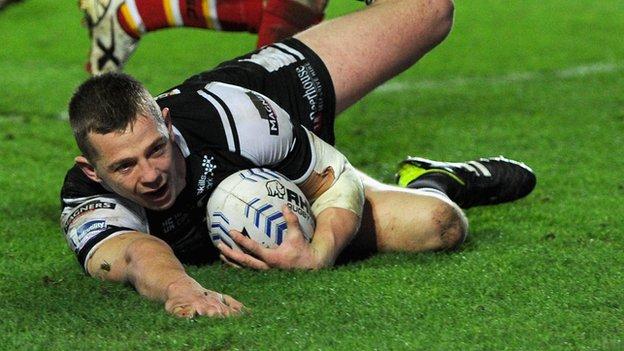 Hull ran in six second-half tries to get their Super League campaign off to winning ways against Catalan Dragons.

The visitors held a four-point lead at the break but Hull hit back in style.

And the Black and Whites appeared to have the game won when they led 36-22 after 75 minutes but the Catalans struck back with three tries in a remarkable finale.

Thomas Bosc had the chance to earn his side a draw but he failed to convert Zeb Taia's last-minute try.

It was Bosc's fourth miss from seven kicks, but Hull's goalkickers fared even worse, with Joe Westerman and Ben Crooks managing just two successful goals from eight attempts between them.

The visitors dominated the first half and led from the 12th minute when winger Damien Cardace received Morgan Escare's pass to touch down one-handed.

Hull FC finished sixth in the table last season while Catalan Dragons finished level on points but one place below in seventh.

With a heavy nose bleed, Bosc lofted a high kick into the path of second rower Elliott Whitehead, who brought it down and crossed the whitewash for their second try.

But the influential Whiting then slipped a superb pass out for centre Kirk Yeaman to touch down to make it 16-12 at the break.

Hull, with former second-row Lee Radford in charge for the first time, made progress after the break and were level when Yeaman collected debutant Jordan Rankin's pass to cross.

Australian stand-off Rankin then produced the defining moment of the match, taking Whiting's offload and skipping past Escare on a 50-metre sprint to the line.

Hull winger Tom Lineham then touched down with ease, and although Westerman could not convert any of the three tries, Hull began to look comfortable leading 24-16.

Substitute Jordan Thompson charged through to score with his first touch on his debut and centre Ben Crooks carved out a try for scrum-half Richard Horne.

Crooks failed to impress when he took over goalkicking from Westerman but he landed Hull's eighth try after collecting Horne's kick.

The Dragons looked well beaten but somehow added three tries in the last 12 minutes - Leon Pryce created one for Taia before Cardace completed his hat-trick and Escare cut the gap to six points.

Taia's late try set up an exciting finish but Bosc failed to make it count.

"We didn't have any football in the first half and I was confident if the penalty count levelled itself up and we got our share of possession, we would cause them problems and we did for the first 20 in the second half.

"For whatever reason, we capitulated in that last 20. It gives us something to work on on Monday, that's for sure.

"Any week we'll take the two points but we want to get some consistency in how we defend.

"I thought all the new boys did a real good job. Jordan is a running threat. He likes the football in his hand."

"It would have been nice to come back with one point but there are a lot of things to talk about on Monday morning.

"I am focused more on the performance than the scoreboard. That's why I'm disappointed and frustrated. In the second half we went away from the game plan and defensively we made some soft and poor decisions."