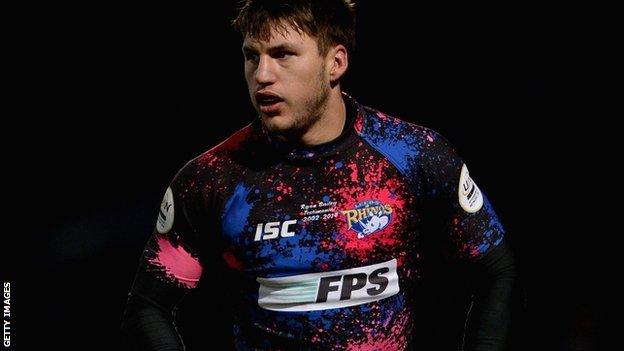 Veteran Kevin Sinfield could only manage three conversions but Rovers were still well-beaten.

Leeds took the lead after just four minutes when a handling error from Rovers full-back Greg Eden allowed centre Moon to easily ground the ball, and Sinfield was successful with his first kick.

But Hull KR hit back when debutant scrum-half Kris Keating, signed to replace Michael Dobson, broke through an open defence and dived over to score, and Craig Hall converted to bring the hosts level.

After a relatively uneventful opening, debutant Briscoe, who signed for Rhinos from Rovers' local rivals Hull FC in the close season, brought the game to life with three consecutive tries.

His first came from 45 metres in the right-hand corner and, nine minutes later, Kris Welham jumped out of the Rovers defensive line, missed the ball and made the try a formality.

Briscoe completed his hat-trick after a superb break by Watkins, although Sinfield was unable to convert any of his tries.

Two minutes later, McGuire scooped up a loose pass near the halfway line, and sprinted clear of the hosts' defence to score.

Rovers' woes continued when Rob Burrow sent his full-back Hardaker over near the posts - which Sinfield converted to the biggest cheer of the day - and centre Watkins added one of his own, also converted by the Rhinos' veteran kicker.

The home side were denied a consolation try when Hall was hauled down by Carl Ablett on the halfway line just as he looked set to score.

"It was a good tight first-half performance but unfortunately Leeds have some world-class outside backs and they were on fire.

"We needed to be better defensively in the second half but their backs were way too good for us.

"We want to get better and the boys are working hard together. The fact it was a tight first half is a positive. It wasn't like Leeds came and blew us off the pitch.

"If we can play two good halves defensively then we'll do okay."

"When you bring someone in of Tom's calibre at this level, you don't expect him to finish those tries.

"But there is an expectation that he will do. The pleasing thing for me was the way he was involved in our sets coming away from our try line.

"He was hard to contain. He's a strong fellow and a very robust winger with speed.

"He punched holes in the KR defence in the first half and we value that as highly as the tries. His strength is his strength."