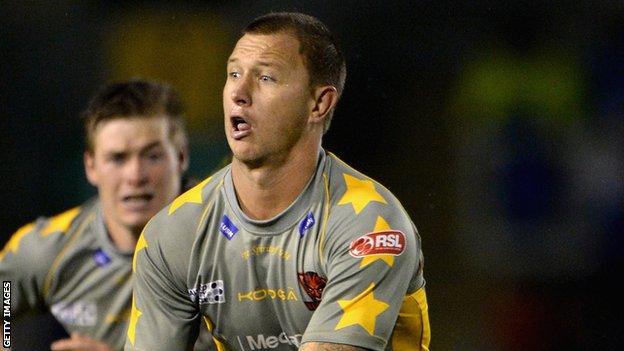 But in the end it was Jake Mullaney's three successful conversions to Paul Sykes' one that was the difference.

Australian Tim Smith joined Salford from Wakefield in the off-season, after 51 games and eight tries across two years with the Wildcats.

Salford owner Dr Marwan Koukash has ambitious plans for the club that finished with the wooden spoon last season and brought in a new era this winter by not only changing the name of the team, but by funding 14 new arrivals at the AJ Bell Stadium.

England stand-off Rangi Chase was the marquee arrival, coming in from Castleford, and his impact was almost instantaneous, putting in the grubber kick that Johnson clawed back into the path of Hock, who crossed over.

The start of the game had been delayed by 10 minutes to allow supporters extra time to get into the ground and Wakefield were slow to get going after kick-off.

The Wildcats are starting life without five of their key players from last season, with Kyle Amor, Ben Cockayne, Paul Aiton and Justin Poore all leaving, while influential stand-off Tim Smith lined up against his former club after joining Salford in the off-season.

And Smith had to make his mark on the Salford play when his half-back partner Chase limped off midway through the first half.

Smith grasped the responsibility, laying on tries for Hansen and Dixon to put Salford in a commanding half-time position, as Mullaney converted all three of his goal kicks.

But it was a Wakefield debutant, Samoa international Godinet, who sparked the Wildcats revival, providing the pass for Ryan to score through a gap before intercepting a Shane Howarth pass and charging 40 metres to go over.

However, Sykes could only land one of his goal kick attempts.

Former New Zealand second-row Lauitiiti, who came close to scoring earlier but was deemed not to have touched down, finally got his rewards when he crossed the line with three Salford players attempting to haul him back.

And the Red Devils endured a nervous finish in front of a record home crowd of just over 7,000 as Reece Lyne failed to hold on to Godinet's floated pass.

"I was biting my fingernails. I thought Wakefield were great in the second half and we didn't have any ball. I was nervous.

"To have the game delayed to get people in the place was fabulous.

"We don't know how serious Rangi is yet and Junior (Sau) has done his groin so we were scrambling around a bit at the end but that bit of courage and heart the boys showed got them over the line," Noble added.

"It's early in the season and it will take a little time for us to get our game sense. That starting 13 weren't here last year. We need more games.

"I thought Hock had a great game. Hansen on the other side had a good game and Dixon complemented them. I also thought Greg Johnson looked the part."

"I've got really mixed emotions. We've literally had three or four sessions with the bulk of our players together and we weren't quite sure how we'd go.

"Overall I'm really happy but I'll be going home disappointed because we dominated the second half so much we should have won the game and we would have deserved it too.

"We had two or three golden opportunities and Ali was adamant that he got the ball down.

"I thought we played really positively with the ball. I think we've given everybody a glimpse and I think everybody will acknowledge we will get better."