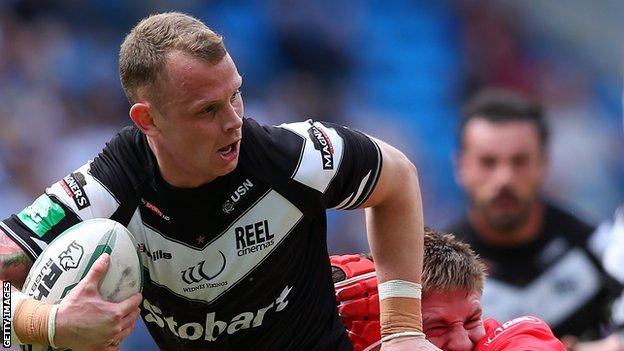 Mason Caton-Brown powered over the line as Broncos led against the run of play.

Debutant Tickle complemented his own try by converting 10 of his 11 goal kicks.

A difficult season has been predicted for Broncos after a winter of rebuilding, and the early signs are ominous for the Londoners.

The side from the capital retained just 12 players from last season after almost going into administration and the past two months have seen a flurry of new signings come into the club.

And Tony Rea's men looked like they had barely become acquainted with each other as Widnes blew away the visitors in a performance that suggested the Cheshire outfit can continue their progress since returning to Super League in 2012.

Vikings dominated early possession but found themselves behind early on when Mike Bishay made ground down the wing and fed Caton-Brown to cross, with Tony Gigot converting.

But the hosts remained composed and replied with five unanswered first-half tries.

Stand-off Brown, superb throughout, took out three defenders with a delightful pass for Owens to cross in the corner, before Tickle beat the London backline to a high Mellor kick to score under the posts.

Brown claimed a pair of tries for himself, the first after creating space with a clever dummy, and the second made through good work with Rhys Hanbury.

In between, Marsh was gifted the simplest of scores after Broncos' Jordan Atkins fumbled close to his own line.

Half-time offered London only a brief respite as Flynn outpaced his man with ease to cross immediately after the break and Dean touched down, both tries produced by the creativity of Brown.

The England international continued to pull Broncos apart, kicking Mellor through for a score and sealing his hat-trick after taking a Hanbury pass.

Caton-Brown touched down in a rare moment of resilience for London, but Tickle fed Marsh to cross over and Brown's chip over the top put in Dean as Vikings mercilessly finished off the visitors.

"It's going to get much tougher than this, and we have Huddersfield, Salford and Leeds in our next three matches.

"Everyone expected us to beat London, who have a tough year ahead with a young group of players put together so late.

"But we showed plenty of character and scored some fantastic tries.

"Kevin Brown will take the plaudits, and deservedly so.

"But Joe Mellor was tireless as was Rhys Hanbury at full-back and Paddy Flynn was exceptional with the ball in his hands.

"Danny Tickle was full of confidence, but he is far more than a goal-kicker. He works so hard and I know how good he is."

"I am happy to be on the start line but this is a big learning curve.

"We clearly weren't ready, but need to move on from here.

"I will take a fair lump of the blame, but there has been a lot of chopping and changing.

"We will be adding to the squad, but these players can do better.

"Kevin Brown was outstanding for Widnes, and if he hadn't played it would have been a tight game. He was that big an influence.

"Our hookers were pretty strong, but our half-backs were outplayed. We have the potential and will be smarter than this in future."