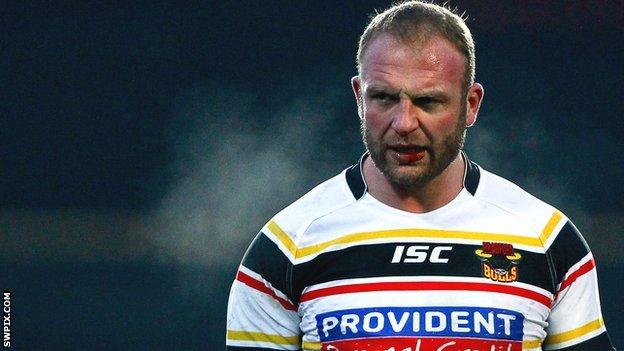 Bradford Bulls say they will take legal action to block Garreth Carvell's move to Hull FC as they believe the prop is still under contract with them.

Earlier on Wednesday, Hull announced that Carvell, 32, had signed a one-year-deal with them.

"This information has come as a great surprise to all of us at the club," said a Bradford spokesperson.

Bradford have told Carvell to return to the club and asked the Rugby Football League to intervene.

Carvell appeared in two Challenge Cup finals and the 2006 Grand Final during his first spell with Hull.

Carvell reportedly believes that his contract has not been transferred to the new company running Bradford following a change in ownership in January, therefore making him a free agent.

However the Bulls do not believe the former Great Britain international is free to walk away, saying they "did not accept his refusal to transfer to Bradford Bulls 2014 Ltd" and that "his playing contract will only allow him to resign if the club is guilty of serious and persistent breach of the terms and conditions of this agreement".

Speaking after Bradford's appeal for their assistance, the RFL stated that they had accepted Hull's registration of Carvell, adding that "any breach of contract between the Bradford Bulls and Garreth Carvell is for the player and clubs to resolve."

Carvell joined the Bulls from Warrington after the 2013 season, but has never featured in a competitive fixture for the Odsal side.

The former Great Britain international previously played 164 times for Hull FC before joining the Wolves in 2008.

Bulls coach Francis Cummins had previously told BBC Radio Leeds: "It's disappointing, but if a player doesn't want to be here you have to move on."

The 21-year-old could make his debut for the Bulls in Sunday's Super League opener against Castleford.