Every player has a goal at the start of a new season. Breaking into the first team, scoring a certain number of tries, gaining international recognition. For Castleford's Brett Seymour it is to live his life again.

"It scares me when I think I am still playing professional rugby league when I could be dead," he says.

I wasn't courageous enough to ask for help, I wanted to bottle it up and that was the wrong way to go

Seymour is talking to me in the Tigers clubhouse after a bitterly cold morning training session with his new team-mates.

"It's not something I like to talk about, or delve into, but I want to help others if I can," he says, as we sit down to film an interview about the night his world almost ended.

Less than a year ago, the 29-year-old Australian tried to take his own life. Struggling with his form and, unbeknown to him, depression, Seymour produced a performance littered with mistakes in a televised Super League match between Hull FC and Widnes.

The following day, after taking a combination of alcohol and sleeping pills, he drove towards the Humber Bridge with the intention of driving straight off it. Instead, he crashed into two parked cars, flipping his onto its roof. He woke in tears in a hospital bed, opposite stunned wife Roseanne.

It proved a turning point in a long battle against depression.

Talking to Seymour, it is clear he is both still shaken by what happened to him, and determined to use his experience to help other professional sportsmen suffering from mental illness.

"That night, everything came to a halt," he says, admitting he can recall very little about his suicide attempt. "I felt down about my rugby and it was starting to overlap into my life. I was in and out of the side so was in jeopardy with my football."

A hugely gifted half-back, Seymour's on-field talent has been overshadowed by his off-field demons. It was taking those demons onto the rugby pitch that almost cost him his life.

"I was going out there and carrying things onto the field. I didn't know I was depressed. Clinically, I didn't know what was wrong," he says.

"I was having different thoughts constantly in my mind. I knew my mental state wasn't where it usually is but didn't know why. When I am at my best I have a clear mind, you have to. You can't take on baggage.

"I wasn't courageous enough to ask for help, I wanted to bottle it up and that was the wrong way to go."

Seymour's problems followed him over from Australia, where he was sacked by two clubs for alcohol-related incidents and convicted of drink-driving before moving to Hull.

After a month in Sporting Chance, the clinic set up by former England footballer Tony Adams, Seymour has the opportunity of a fresh start.

"Without Sporting Chance, I wouldn't be here," he says.

His days there were spent in one-on-one counselling and group activities with other professional sportsmen. "One other guy plays in Super League and there were a couple of footballers there too," he adds. "I'm still in touch with them."

But getting his head right has only been half the battle for Seymour, whose recovery and subsequent absence from sport left him unfit and overweight when Castleford offered him a trial.

That brought a double challenge - getting himself into Super League shape while reintegrating into the macho, playground atmosphere of a dressing room full of new team-mates.

"It was daunting when I first came back as I was worried about how the guys would take to me," he admits. "It was like starting my career afresh. I had doubts in my mind. I have never felt like that at a club before." 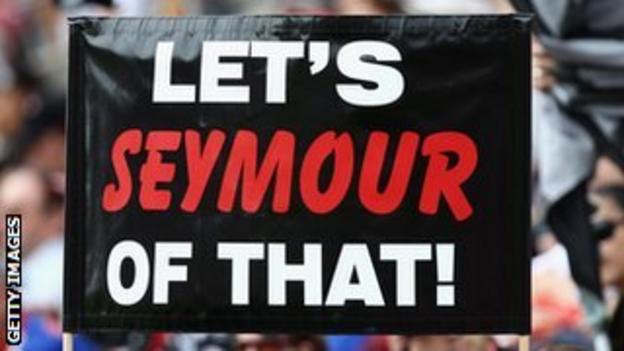 The Tigers have helped Seymour find a family home on the doorstep of their stadium, and he is back in decent shape.

"He's been great," coach Daryl Powell says. "He found it tough when he came back but has worked exceptionally hard since Christmas.

"He looks a different man. When he came back, he still looked a little bit stressed, but now looks a freer individual who is enjoying himself. It took him a while to settle in with his new team-mates but he now looks at ease."

Powell says handing Seymour a trial was an easy decision.

"There wasn't a massive amount of risk for us. He's been a pretty talented player, he just needs to rediscover that," says the Castleford boss, who believes Seymour's struggles are a warning to fellow professionals playing in such a "macho" sport.

"Individually you are judged all the time and it can be quite critical so some people may struggle," he adds. "While you judge people as players you need to be aware there is a person underneath that needs to be respected for what they are about as a bloke."

Seymour faces a fight to get a run in the side as Castleford have four or five strong options for two places in the halves.

"He appreciates there is a lot of stake for him this season," says Powell.

"Top eight is the team goal," he says. "Individually my goal is to take the chance if I'm given one, to make the position my own. I want to show the Cas fans I'm a good guy to support and I know I can play. I also want to help others with mental health problems."

Seymour says players from other Super League teams have asked him for help.

"I have passed numbers on, and that's a massive step," he says. "I'm only in the early days of my recovery but I'm happy to help any kid out so that he doesn't get to the point that I did in wanting to end my life.

"We play a macho sport and bash each other, but need to realise you can't handle everything on your own."

Watch the full interview on Saturday Sportsday, 15 February, 12:45 GMT on BBC One.