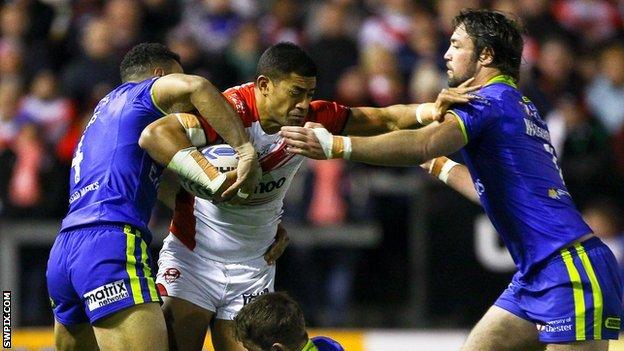 Warrington head coach Tony Smith has admitted his side were second best against St Helens in their Super League season opener.

"[We were] outplayed. Saints were too good. They out-kicked us and out-enthused us and they got on a bit of a roll," Smith told BBC Radio Manchester.

Unfortunately there was a bit of bad and ugly there tonight

"There's food for thought. We've got some areas we need to brush up on."

The result means St Helens have won on their past four visits to Warrington.

With players such as Adrian Morley, Brett Hodgson, Garreth Carvell and Lee Briers having moved on from the club or retired, it was always going to be a season of change for Warrington.

And they were outplayed for large parts of the game at the Halliwell Jones Stadium as Nathan Brown's side made an impressive start to the new campaign.

"I didn't think they were too far ahead of us in terms of play," added Smith.

"We'll look at our review just like we always do, look at the good, bad and the ugly. Unfortunately there was a bit of bad and ugly there tonight."