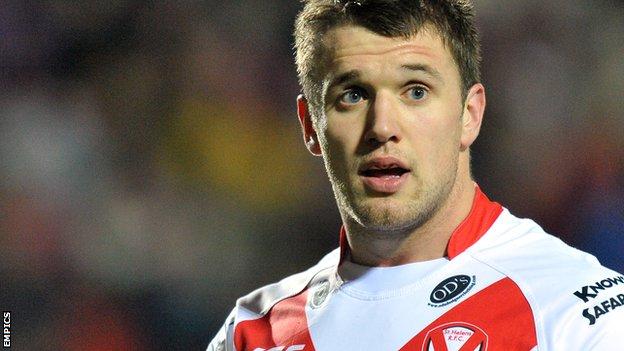 Widnes have signed experienced forward Paul Clough on loan from neighbours St Helens for the remainder of the season.

Clough, 26, links up with the Vikings immediately and will be available for their next Super League fixture against Huddersfield Giants on 28 February.

But the emergence of youngster Alex Walmsley, plus the off-season arrivals of Mose Masoe and Kyle Amor, have left chances limited at Langtree Park.

"What we have recruited in Paul is a tried and tested front rower who has played in Grand Finals and Challenge Cup finals," said Widnes coach Denis Betts.

"He will give us a real boost. Saints have a really big squad and we are a little skinny. Bringing in Paul will help us in that area.

"He's a player with a very good work ethic and he'll fight hard for a place here."

St Helens coach Nathan Brown added: "He is at a stage in his career where he needs to be playing regularly. With the competition in the squad the most intense it has been for a long time, we couldn't guarantee that.

"It made sense for both the club and the player for Paul to go on loan, and we will be keeping a close eye on how he does at Widnes."