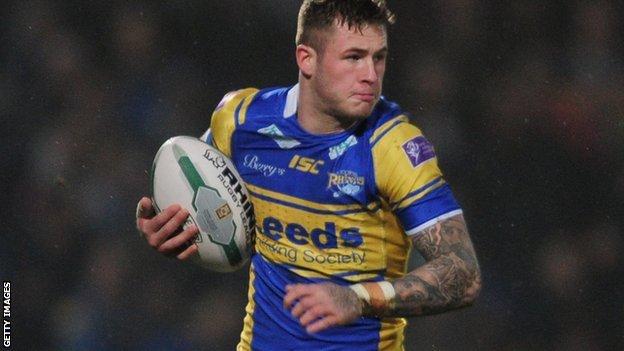 Joel Monaghan opened the scoring for Warrington at Headingley.

Tom Briscoe orchestrated Leeds' response, putting Hardaker through before scoring a stunning 70-metre try to make it 12-6 at half-time.

Hardaker grabbed his second after the break, but Wolves fought back with Ben Westwood crossing and Gareth O'Brien pulled up just short in a tense finish.

While the Rhinos started their season with an impressive 34-6 win at Hull KR last week, beaten 2012 and 2013 Grand Finalists Warrington remain without a win, having been beaten 38-8 at home by St Helens.

Just as he did against Saints, Monaghan gave Wolves an ideal start with the game's first try, showing great control to ground the ball from O'Brien's high kick.

Stefan Ratchford added the extras, but that was the last time the visitors led.

Briscoe showed great vision and a deft kicking ability to set Hardaker up midway through the first half.

Both sides went close before Briscoe came up with a spectacular effort, wrong-footing Ratchford and holding off Ben Currie's last-ditch attempt to stop him from putting the hosts ahead. It was the former Hull FC winger's fourth try in two games since joining Leeds.

Kevin Sinfield added both conversions before the interval, but Hardaker cut through a hesitant Wolves defence to score his second try on 56 minutes. Sinfield converted then struck an upright with a drop-goal attempt before hobbling off injured.

Westwood set up a frenzied finish, muscling over from close range.

Ratchford's second goal cut the gap to just six points and the Wolves could have snatched a draw had O'Brien not been brought down just short of the line.

"On the whole, I'm happy with where we are at the moment.

"But we're two games into a season and we know it will be tough next week at Catalan and in the weeks thereafter."

"I don't think it's a break (Kevin Sinfield's injury). He'll go through all the processes with the medical staff and we'll get him scanned.

"We were a lot better and I'm pleased about that.

"Our goal-line defence was tested a fair bit in the first half and I thought it was terrific.

"Leeds' defence in the second half probably ended up wining the game for them.

"We had opportunities at the back end to take a point away but I thought Leeds were a little bit better than us."