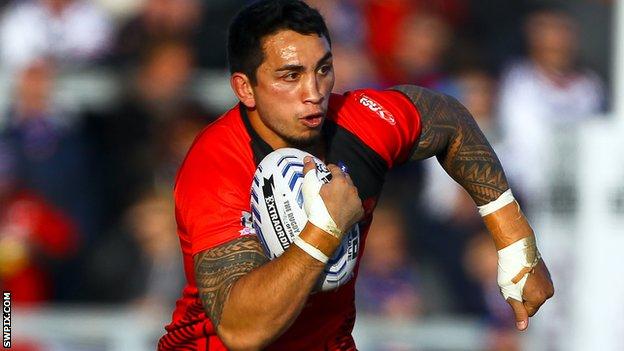 Salford Red Devils ran in eight tries as they comfortably beat London Broncos in their first visit to The Hive.

Scott Moore gave the Broncos the lead, but scores from Danny Williams, Theo Fages, Tim Smith and two from Harrison Hansen gave the visitors a 26-6 lead.

George Griffin and Mike McMeekan scored late consolations, only for Fages to wrap things up with his second try.

The Broncos made an energetic start in what was their first Super League match at The Hive, with hooker Moore opening the scoring on 11 minutes when he capitalised on a handling error in the Salford backs to dive over the line.

France international Tony Gigot converted for a 6-0 lead, but Salford levelled the scores four minutes later, utilising the width of the pitch before Smith's short pass fed Hansen to stride through, with Mullaney adding the extras.

The Red Devils took the lead shortly afterwards, when a passing move culminated with winger Williams scampering over to touch down.

Hansen got his second try just before the half-hour mark when he picked up Smith's bouncing kick to cross and Mullaney converted for a 16-6 lead.

After Mike Bishay had spilled the ball as he twisted over the Red Devils line, the visitors seized control of the match with two tries in three minutes before half-time.

First, Fages rounded off a neat move and then former Broncos hooker Tommy Lee broke through the defence to put Smith in under the posts.

The home side rallied after the break but failed to take advantage when Hock was sin-binned following a clash with James Cunningham at the scrum.

In fact it was Salford who scored with the England international off the pitch, with full-back Mullaney adding a fabulous solo effort, which he subsequently converted.

After Hock's return, the Red Devils extended their lead when Mullaney broke through the Broncos defence and Hock shifted wide for Meli to stroll over.

Broncos pulled two tries back late on either side of a second try from Fages, with Griffin grounding under a pile of bodies and McMeekan capitalising on a mistake by Jordan Walne.

Salford, who were without stand-off Rangi Chase, continued their 100% start to the season while the new-look Broncos have lost their opening two games.

"I thought there was a big reaction from last week. We are a very young, inexperienced team and we really took it to a very experienced side.

"We were really committed to being a team and I thought there were some wonderful signs.

"There were definite signs of progression and I expect us to progress further again.

"We always knew that this was going to be a tough period for us and we have to work through it."

"It is a tough ask for any player to step in for Rangi Chase and Theo [Fages] did really well.

"He showed the value that he has to us. He has not had much game time and I was really pleased with what he did for us today.

"Overall I thought it was a pretty good day. We were a bit scrappy in the first half and we had to defend well as London were very enthusiastic.

"But we showed our attacking prowess and I'm satisfied where we are at, at this stage of the season."