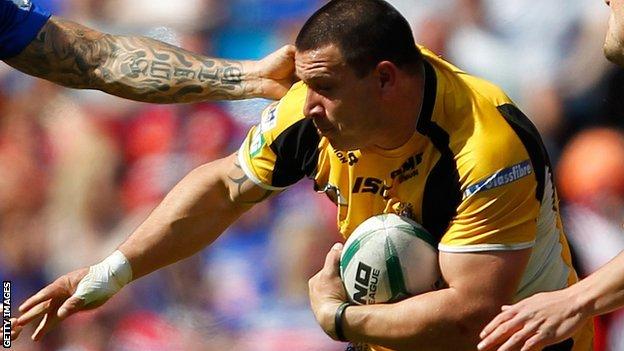 Justin Carney scored a hat-trick as Castleford beat Catalan Dragons to make it two wins from two this season.

Carney grabbed his first before Kirk Dixon's effort, and Morgan Escare then responded for the visitors.

While both sides were reduced to 12 men, after Eloi Pelissier and Scott Wheeldon were sin-binned for fighting, Carney made it 12-6 before half-time.

Jordan Tansey and Daryl Clark went over before Carney completed his treble to send Tigers top of the Super League.

While Castleford are one of four sides to remain unbeaten, their superior points difference is enough to put them ahead of St Helens, Leeds and Salford.

Defeat was Dragons' second already this season, having been beaten 36-34 by Hull FC in their opener.

Carney began the scoring with a strong finish after Marc Sneyd gathered his own high kick and sent a long pass out to the winger, while at the other end Tansey did well to twice collect hanging kicks in blustery conditions to hold Catalans at bay.

Castleford extended their lead on 22 minutes as Hauraki flicked the ball out to Dixon on the short side and the winger finished in the corner.

Carney was denied his second try when Tansey's pass to find the Australian was ruled forward.

The Dragons then hit-back with Escare racing clear to finish from Leon Pryce's long pass, but with both sides a man down following Pelissier and Wheeldon's scuffle, Michael Shenton fed Carney to touch down just before the break.

Carney turned provider in the second-half, again linking up with Shenton who sent Tansey over, with Sneyd adding the extras and a penalty to open a 14-point lead.

Carney then completed the rout a minute from time when he outmuscled Michael Oldfield to ground the ball in the corner.

Castleford coach Daryl Powell: "We've shown we've got a little bit of something about us.

"Obviously defensively today we've got to be happy with conceding six points against a team that have been outstanding over the last few years in Super League.

"And we've scored over 30 points in our first two games.

"There's quite a few people who doubted we'd be able to score points after what we've recruited and what we've lost, and I think we've sort of answered a few of those questions today."

Catalan Dragons coach Laurent Frayssinous: "It's embarrassing the desire the players put on the field today. Cas were too good for us.

"Defensively that's too many tries in two games for me.

"We were not rewarded by the ref. We were always being penalised. I think the ruck was too slow - it became a defensive game, not an offensive game."