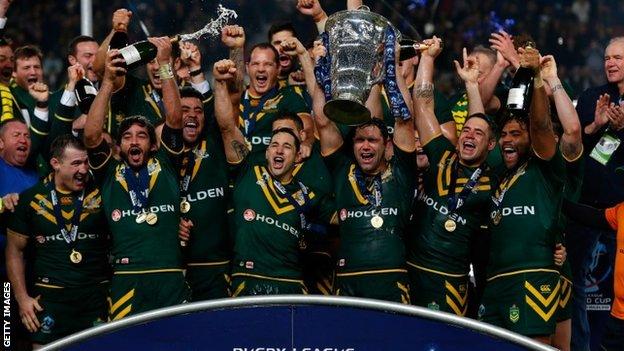 The 2017 Rugby League World Cup will be hosted jointly by Australia and New Zealand.

The winning bid beat off a challenge from South Africa, who have never hosted the tournament.

The Rugby League International Federation say they want the tournament to build on the success of the 2013 World Cup, which saw games in England, Wales, France and Ireland.

"But the joint Australia/New Zealand bid was selected as the one with the greatest chance of success in providing more compelling games in world class environments in front of big, passionate crowds."

Australia are the current World Cup holders after beating the Kiwis in November's final at Old Trafford.

It will be the third time the two southern hemisphere rivals have staged the event together, after they were co-hosts in 1968 and 1977, while Australia were the hosts of the 2008 event.

Details of the qualifying competition for the tournament will be announced later.