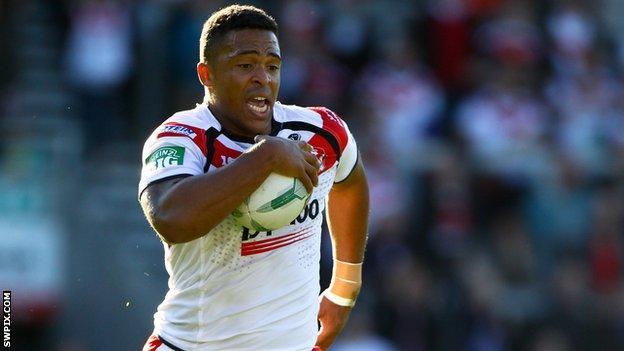 Jordan Turner says St Helens must not relax after making a stunning start to the Super League season.

With a match against his former club Hull FC to come at Langtree Park on Friday, Turner wants Saints to build on an opening-day hammering of Warrington.

"That game's been put to bed now," the centre told BBC Radio Merseyside.

"There's no point having a great result and then turning up for our first home game - Steve Prescott's memorial game - and not putting a performance in."

St Helens and Hull will play for the Steve Prescott Cup, in honour of a player who represented both clubs and passed away in November aged 39, having battled cancer for several years.

The winners will be the team with the highest aggregate score from their two Super League meetings.

The numbers available to him in the coming weeks will soon be boosted further by new recruits Mose Masoe and Richard Beaumont, who are making their way back from injuries.

"We always planned that he'd be physically fit for the Salford game [on 27 February] and it's looking that way, but he won't have done much team work by then, so you would think he would be back the following week if things go as they are.

"Richard has had a couple of minor setbacks with his groin surgery, but they can happen.

"We're not sure if it will be three to four weeks or five to six weeks - we have to be guided a little bit by the experts at the moment."