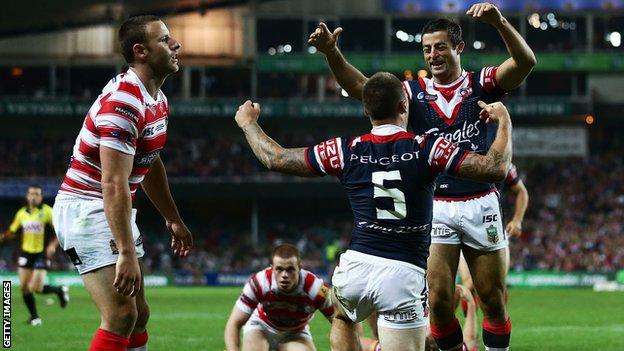 Shaun Wane said it was "upsetting" to see his side fail to perform as Wigan were outplayed by Sydney Roosters in the World Club Challenge.

The Super League champions were beaten 36-14 by Australia's NRL winners.

"We played for about 15 minutes and scored three tries. That's not enough against a quality team," Warriors coach Wane told BBC Radio Manchester.

Australian clubs have won the World Club Challenge in five of the last six seasons. Leeds are the only exception, beating Manly in 2012.

"They're a good team, but if we play anything like our potential we really test them and we didn't do it."

The 49-year-old continued: "We undersold ourselves and that is upsetting to me. If we'd have come here and had a real dig and still lost, I'd be OK, but we've not done that."

Wigan, who had been down under for two weeks in preparation for the match, trailed 18-0 at half-time.

The Warriors threatened to mount a comeback with a try from Joe Burgess and two more from Josh Charnley before the Roosters raced to victory.

It was the first time for 20 years that the World Club Challenge had been played in Australia as a one-off fixture and Wane would like to see it return, while expanding the competition to include more Super League and NRL teams is a further possibility.

"I'd love to come back and do it again, put in a better performance and show people what we can do," said Wane, who won the World Club Challenge as a Wigan player in 1987.

"We've not done that and it's going to be a long time until the next one. Until then, we'll be working hard to make sure this never happens again."