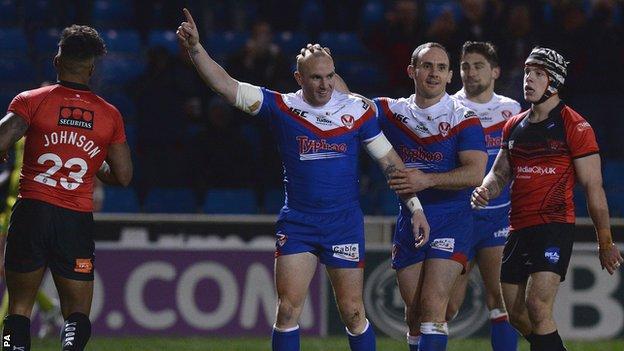 St Helens made it three wins from three in Super League and ended Salford's 100% start to go top of the table.

First-half scores from Jon Wilkin and Luke Walsh put the visitors in control.

A Salford victory would have taken the Red Devils top for the first time in the Super League era but they were well beaten at the AJ Bell Stadium.

Brian Noble's newly-assembled side began with wins against Wakefield and London Broncos but many saw the visit of much-fancied Saints as their first real test of the campaign.

After a 15-minute delay to kick-off because of heavy traffic, the hosts were made to pay for a slow start as Nathan Brown's men raced into a 12-0 lead inside 12 minutes.

Strong running from Willie Manu and Amor set up second-row forward Wilkin for the game's opening score and scrum-half Walsh, an influential figure since joining Saints from Penrith Panthers, quickly added a second when he latched on to Tommy Makinson's kick.

Salford, without injured England half-back Rangi Chase, offered little as an attacking threat in the opening 40 minutes and escaped further damage before the end of the half when Makinson's effort was ruled out for a knock-on.

Sia Soliola and Adam Swift set up a superb counter-attacking try for teenage centre Percival and prop Amor capped an excellent display with a close-range score that put the result beyond doubt.

Walsh then slotted over a penalty and Laffranchi's try under the posts, followed by Percival's second on the break, completed an impressive victory to add to earlier successes against Warrington and Hull FC.

And a miserable night for Salford was rounded off when Gareth Hock, another of their winter signings, hobbled off with an ankle problem.

"I am disappointed but those kind of things can happen with a new team.

"There were some great lessons for us. I would be more disappointed if that was round eight, nine or 10 and we dished up something like that.

"We got caught at the start but we got back in the game and that breakaway try 10 minutes into the second half knocked the stuffing out of us.

"There is nothing I have seen that we can't improve on. The players are probably more disappointed than me.

"[Gareth Hock's injury] doesn't look good. He's going for a scan tomorrow and I'm keeping my fingers crossed but it's looking like a six or seven-week job.

"We're obviously happy with the result. It was tough. We had to work hard to get the score we did.

"I think we're a work in progress. The guys working hard for each other but we know to catch up with Leeds and Wigan and Huddersfield and those sides, we've got to keep our feet on the ground and keep working hard and improve.

"Our defence seems to be improving. We're not perfect but the pleasing thing is that, when things go wrong, the guys are covering for each other."