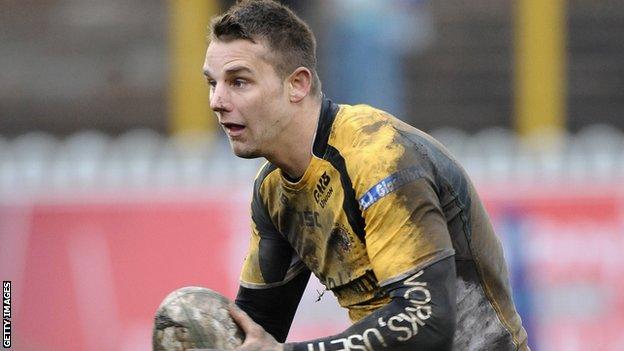 Richard Owen scored a hat-trick as Castleford eased to victory at Hull KR.

James Green went over to give the hosts an early lead, but two quick Owen tries and one from Frankie Mariano turned the game in Castleford's favour.

Omari Caro closed the deficit to eight points at the break to give the home side hope of a second-half fightback.

But Castleford, who had already beaten Bradford and Catalans, wrapped the game up with Oliver Holmes's try, before Owen completed his hat-trick.

The hosts made an excellent start when a clever pass from Kris Keating sent Green over, Travis Burns kicking the extras.

But Castleford hit back with three tries in 13 minutes, all converted by Sneyd.

Richard Owen skidded in at the corner before then outjumping Greg Eden for his second try.

And Mariano went over for a try, as again the Hull KR defence were outjumped.

After Cas scrum-half Liam Finn was sin-binned for what appeared to be a leg twist on centre Kris Welham, the hosts took advantage when Caro scored in the corner, although Burns missed the conversion - the visitors' lead remaining 18-10 at the break.

Castleford's Mariano had a try disallowed after the restart for obstruction earlier in the move, before the home side's best pressure of the game followed.

They were unable to turn their possession into points and were made to pay when replacement Holmes waltzed over, with Sneyd kicking his fourth penalty.

Sneyd then made it five from five - and took his personal tally to 14 points - when he converted Owen's hat-trick try to leave Hull KR winless from three attempts.

It also secured Castleford their first win at Hull KR, ended a 20-year wait for success at Craven Park.

"Cas were way too good. They are playing really good footie.

"We had a lot of opportunities but we keep letting teams off the hook.

"Our execution is nowhere near where it should be at this time of year."

"The biggest question I've been asked was where our points were going to come from and I said probably from all over because we've a lot of good players.

"Liam Finn has been an outstanding player in the Championship for a fair while. His kicking game is pretty tidy and he's been tough defensively.

"Everyone has a pop at him but he was great again tonight. He was unlucky to be sin-binned. I didn't see an awful lot in that."