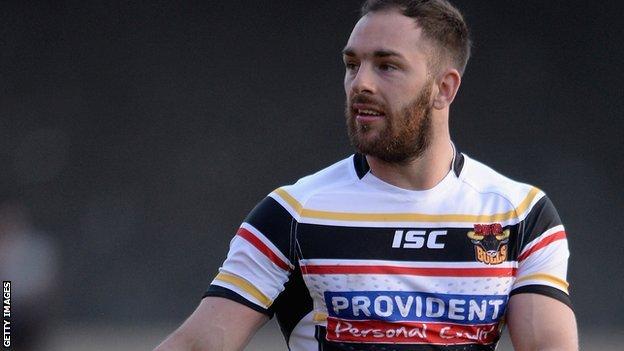 Bradford Bulls eased to victory against London Broncos as they continue to wipe out their six-point deficit.

Luke Gale grabbed the opener, then Adam Sidlow powered over for the Bulls before Thomas Minns crossed to make it 12-6 at the break.

Danny Addy added a third for the Bulls, only for James Cunningham to respond for the Broncos.

Bulls on the way back again

The Bulls have not finished any higher than ninth for the past five seasons.

Gale then landing a drop goal before Tom Olbison touched down, Jamie Foster kicking all four of his conversions.

Victory for the Bulls ends a turbulent week in which they were docked six points after entering administration for the second time, prompting the club's proposed new owners to pull out.

Despite the punishment, while they remain bottom of the table, their second win of the campaign moves the Bulls to within one win of the pointless Broncos.

Addy and Adrian Purtell combined for the first try, setting Jamie Foster free down the left wing where he found Gale in support to score against his old club.

The visitors then suffered a double blow with full-back Nesiasi Mataitonga forced off injured and Mason Caton-Brown helped off after receiving lengthy treatment.

Danny Bridge was held up for the Bulls before Sidlow crashed onto a Matt Diskin reverse pass to help double the home side's advantage.

Minns pulled a try back, chasing a Scott Moore kick into the corner, Josh Drinkwater adding the extras.

Bradford's Luke George was next to be forced from the field in the first half, suffering a heavy knock diving for the line.

The home side eventually restored their 12-point advantage after the hour mark, James Donaldson breaking clear from 40 metres out to put Addy under the posts.

Bradford wasted a string of chances and Cunningham pounced on a Foster fumble to give London hope, but Gale slotted a drop goal and Olbison added a deserved fourth try a minute from time.

"There's no question about the spirit among the players.

"We have to show character all the time and found a way to get the win which means we could be less than a week away from getting back to even keel [zero points].

"The stuff that those players have had to put up with - just when we think were getting somewhere then something else happens.

"And I can't blame Nick Scruton [who has joined Wakefield]- he was a mess when he came to tell me that he'd decided to go to Wakefield.

"But it put us in that situation again, whereby we were a couple of days before the game and found that one of our players wasn't going to be there."

"It was an outrageously gutsy performance, given where we are at.

"Plenty of teams would have got beaten by 50 out there today.

"We had no subs left, lost three outside backs and had four injuries during the first half, so it was a big ask and a huge challenge in adversity.

"It was great to still be in it at the back end of the game and at one point I thought we were going to get the job done."