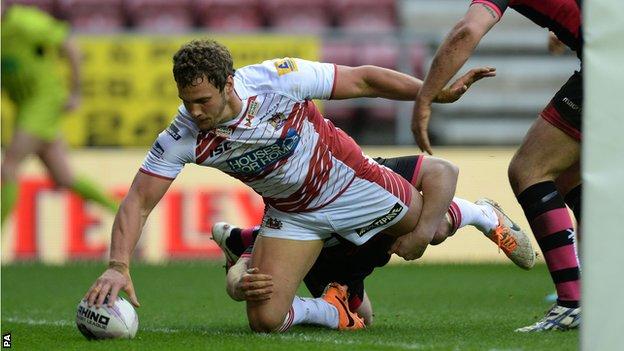 Wigan picked up their first points of the season against winless Wakefield.

Wakefield impressed after the restart, Peter Fox adding to Danny Kirmond's try, but their comeback did not last.

Wigan trust in their skipper

Wigan captain Sean O'Loughlin was one of only nine players retained from the team that lost the World Club Challenge to Sydney Roosters.

The England loose forward persuaded coach Shaun Wane not to rest him and he responded with two tries.

Reece Lyne added a fourth try for the Wildcats, converted by Jarrod Sammut, but it proved to be a mere consolation.

Returning to Super League action, Wigan put their World Club Challenge defeat by Sydney Roosters and their opening day loss against Huddersfield firmly behind them.

Iain Thornley, Ryan Hampshire and John Bateman were Wigan's other try scorers in a dominant display against lowly Wakefield, who have now lost all three games.

Manfredi's unconverted try, his first for the club, opened the Cherry and Whites' account as the Wildcats struggled to get going.

The visitors then led for the first and only time when Lauitiiti crossed in their first attack, Sammut kicking the extras, but Wigan soon took hold.

A bullet pass from Blake Green led to Thornley crossing the whitewash and Smith followed his first successful conversion by carving open the Wakefield defence to supply skipper O'Loughlin.

The England loose forward then added another try, which Smith converted again, and Hampshire touched down Green's cross-field kick for their third try in seven dominant minutes.

Bateman notched Warriors' sixth try, but it was the Wildcats who finished the first half scoring through Kirmond, Sammut reducing the interval deficit to 30-12.

Wakefield then looked set to make a comeback when Pita Godinet's interception got winger Fox over but they failed to keep Wigan at bay.

Flower crossed, and Smith kicked the extras, before Burgess produced the moment of the match with a glorious long-range solo score to bring up the 40-point mark.

With Wakefield full-back Richie Mathers in the sin bin against his old club for taking out Hampshire off the ball, Farrell added the hosts' ninth and final try, Smith kicking his fifth conversion.

Lyne then raced 90 metres to cross for Wakefield's fourth try, Sammut converting again, but it was too little too late.

Wigan coach Shaun Wane: "It was always going to be a tricky one for us.

"We haven't spent much time on the field this week and I just wanted a win.

"We weren't at our best but we got the two points so I'm very happy, especially with all the disruption and the changes I made.

Wakefield coach Richard Agar: "It was a tough day for us.

I thought Wigan were just too strong for us at times. At times it was men against boys and we need to learn to be a little bit tougher for a bit longer.

"I'm not going to dwell too much on today. We had an incredibly inexperienced middle.

"We knew we were doing it light and it showed unfortunately."