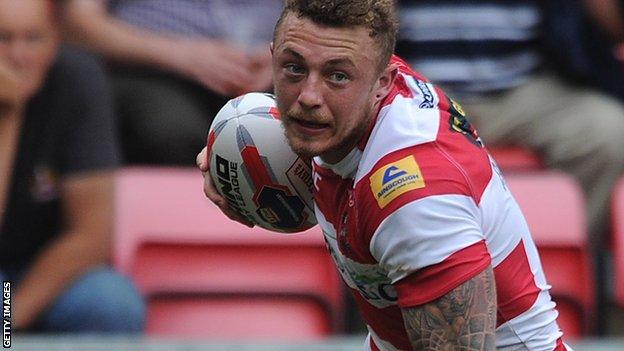 Wigan coach Shaun Wane says two-time Super League top try-scorer Josh Charnley must "learn to perform" before he will be considered for a recall.

The winger, 22, was left out of Saturday's 46-24 victory against Wakefield following defeat by Sydney Roosters in the World Club Challenge.

The win was the Super League champions' first this term.

"He was dropped," Wane explained. "He knows that and knows he needs to improve to get back in the team."

Wigan trust in their skipper

Wigan captain Sean O'Loughlin was one of only nine players retained from the squad that lost the World Club Challenge to Sydney Roosters.

The England loose forward persuaded coach Shaun Wane not to rest him and he responded with two tries.

"Josh didn't play well in Sydney. What is really important for me is that Josh Charnley learns he need to perform."

Manfredi, 20, marked his surprise start with his first try for Wigan.

England winger Charnley ran in two tries against the Roosters as the Warriors threatened to mount a second-half fightback against Australia's NRL winners.

Wane described his side's failure to perform as "upsetting", having been 18-0 down at half-time.

Just nine players who featured in Sydney retained their places in the squad as Wigan earned their first points of the season against the Wildcats.

Former North Queensland Cowboys full-back Matt Bowen was left out and Darrell Goulding was among other players rested.

"I understand where we are at, and knew the performance [against Wakefield] wouldn't be 100%, and it wasn't, but we got the two points which is important," added Wane.