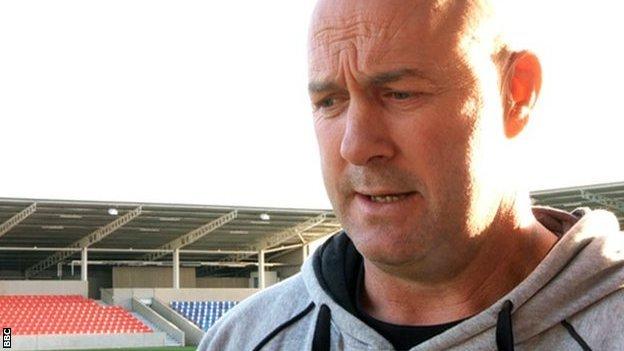 The 49-year-old Australian was after 15 months in charge, and replaced by experienced Brian Noble.

In 1996, Workington Town were relegated in Super League's inaugural season - that remains the last time Cumbria had a top flight team.

Since 2009, Super League has operated on a franchise basis with no relegation to, or promotion from, rugby league's second-tier.

From 2015, the franchise system ends. In preparation for that, five teams will be relegated from the Championship this season.

Prior to his role there, Veivers spent seven years as Noble's assistant at Wigan Warriors and Bradford Bulls.

"I don't know a lot about the club, but I have a good grounding and can come in with an open book," Veivers said.

"I want to see what the players that are already here can do so I won't make quick judgments - my appointment isn't a quick fix."

Veivers had a long playing career in England after joining St Helens from the Brisbane-based Southern Suburbs in 1984.

He spent 12 seasons at Knowsley Road before brief spells with Huddersfield Giants and Swinton Lions.

And Workington are hoping that his no-nonsense approach will help move the club forward.

"He comes with a wealth of experience, is very highly-regarded within the game, and has a wealth of contacts throughout rugby league."

Veivers' first match as boss will come against Barrow Raiders in the Championship on Sunday.