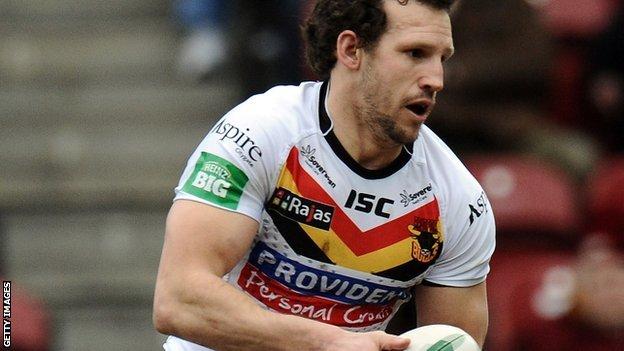 The club are back in the hands of administrators after a proposed takeover bid was withdrawn last week.

The Bulls are currently bottom of Super League, having been docked six points for going into administration.

"If we can get a chance to enjoy our rugby and play without the off-field stresses, then we might be able to achieve something this year," he said.

Talking to the Super League Show, 30-year-old Kearney added: "For years now we have been getting to the end of the month and wondering whether we are going to be paid.

"I'd like just to come to the end of the month and not have to talk about it."

On Saturday, prop Nick Scruton chose to leave after six years at the club for Super League rivals Wakefield.

Bradford coach Francis Cummins said he understands why Scruton left, but he insisted the Bulls' greatest asset in trying to avoid relegation was team unity.

"We have to crack on and cling to each other because that is all we have got at the moment," said Cummins.

"We don't blame Nick for doing whatever he has done. He has to think about his family and if he has got more security with that, then all good for him."

Bradford are one win away from wiping out the six-point deduction after Saturday's 25-12 victory against London Broncos.

St Helens forward Jon Wilkin said the Bulls' two wins to date this season have been all the more impressive considering the issues the club are dealing with.

"You have to credit the Bradford guys for how they are dealing with the situation," said Wilkin.

"The coaches and players deserve so much credit for how they have started the year under this dark cloud of financial pressure that has hung over the club for best part of two or three years.

"When you are playing professional rugby league we are not blessed to be paid as well as professional footballers and other sportsmen.

"The security this job offers maybe was comforting, but the Bradford guys just haven't had that. To do what they have done, with really huge uncertainty about the future, is remarkable."