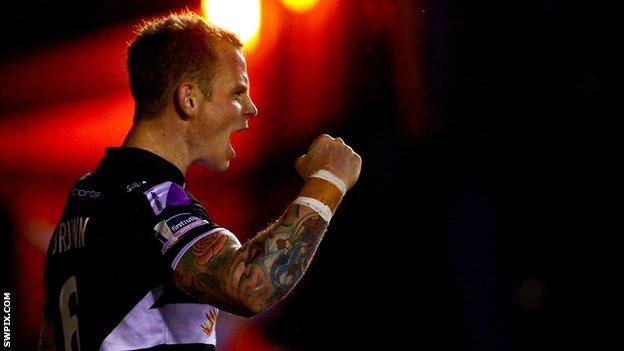 Salford quickly went ahead, with Tommy Lee finishing, only for the Vikings to reply with a Joe Mellor score.

The Red Devils again led as Theo Fages crossed, but a try from Rhys Hanbury and a brace from Kevin Brown saw the home side finally pull away.

Three victories from their opening three games of the season have put Vikings level on points with the early-season leaders and continues a six-match winning run that started at the back end of the 2013 campaign.

They were further boosted by the first appearance of skipper Jon Clarke since August after a back problem, and made a start against Salford that suggested the thrill of last week's narrow 22-20 win over Huddersfield had yet to wear off.

Dean had already been stopped short of the line by Jake Mullaney when he received the ball from Hanbury to finish, with Danny Tickle converting.

The early setback could have rattled the Red Devils, who were humbled 38-0 by St Helens the previous week and were without influential trio Gareth Hock, Rangi Chase and Francis Meli.

However, Brian Noble's men, chastened by that Saints defeat, not only showed more resolve in defence, but displayed a persistence in attack to stun the hosts with two quickfire tries before the break.

The first was a stunner, with Johnson picking up the ball in his own half, riding a two-man tackle and leaving Hanbury for dead on his way to the line.

And Lee caught Widnes off guard, finishing when Tim Smith's grubber kick had put Salford on the front foot, with Mullaney kicking both conversions.

But as quickly as the visitors had turned the game around, they were trailing again, conceding a penalty on the stroke of half-time that Tickle put between the posts and then lacking conviction as Widnes scored after the break.

Brown's high kick was allowed to bounce and the ball found its way out to Mellor, who burst through for a try and Tickle kicked the extras.

It was Salford's turn to hit back, as Mullaney showed quick feet to free up Fages, who hit the floor short of the line but was deemed to have not been tackled by Mellor and got back up to touch down, allowing Mullaney to convert.

But the back and forth continued, with Denis Betts's side regaining the initiative with a pair of scores, as Hanbury stretched his fingertips to place the ball on the line and Brown coolly applied the finish to a move he started.

It was the fourth time the lead had changed hands in the contest, but there were to be no more surprises as Brown wriggled the ball down to inflict Salford's second defeat of the season.