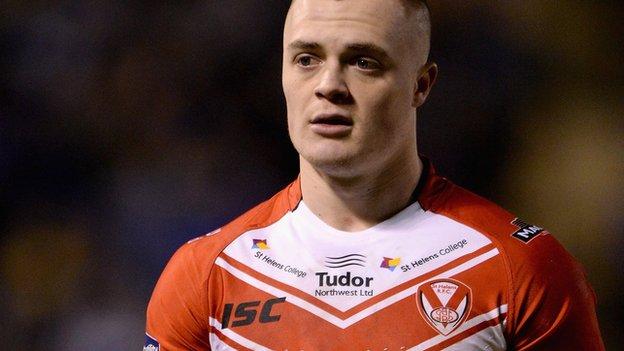 The hosts started strongly with Swift and Jonny Lomax touching down.

Rovers then hit back through Kevin Larroyer, with Greg Eden's converted try making it 12-12 at the break.

The visitors were dealt a half-time blow with Craig Hall going to hospital with a suspected ruptured testicle.

While Hull KR's winless run of six Super League matches dates back to August, they were buoyed by their recent record against the Saints, having beaten them in three of their four meetings in 2013.

Saints march on with four wins

It took a wild pass from Rovers' full-back Eden on six minutes to allow Swift to race over.

The winger then helped play provider, sending Lomax free - the full-back dummying Eden to make it 12-0 following Walsh's second conversion of the night.

Saints looked in command and could have been three tries up had Gary Wheeler taken Lance Hohaia's pass.

Rovers eventually replied through Larroyer following smart play by James Green, and Ben Cockayne put Eden over with an inside pass, which Travis Burns converted to level the scores at half-time.

Walmsley crashed over from short range to muscle Nathan Brown's Saints back in front eight minutes after the break, with Swift landing his second soon after, finishing the good work of Wilkin and Lomax.

Walsh then created two tries in three minutes for Soliola and Makinson with teasing kicks to stretch the lead to 32-12.

Wheeler squandered another chance with a second handling error, before Swift leapt high to help put Wilkin over from another Walsh kick.

Hodgson caught Saints' defence off guard to dart over from a quickly taken tap penalty, and Rovers finished with 12 men with Burns sin-binned for a blatant obstruction on Wilkin before Paul Wellens had a try disallowed.

"Adam [Swift] and Tommy [Makinson] played terrific football. They were super at the end of last season and are carrying on from where they left off.

"With Jonny Lomax impressing at the back, they have been three of our most consistent players.

"But we were desperate for half-time because we kept dropping the ball. Rovers had all the field position and they have a lot of good forwards and confident half-backs.

"We came up with some nice kicks and we were hard to handle."

"Craig [Hall] has gone to hospital for scans and we are not being helped by losing a key player every game.

"It was a good, tough contest in the first half but then we had no ball and they made us pay.

"We were well on top, but the second half wasn't good enough and we made too many errors.

"We never gave up but they double our possession. I am disappointed with some of our individual errors."