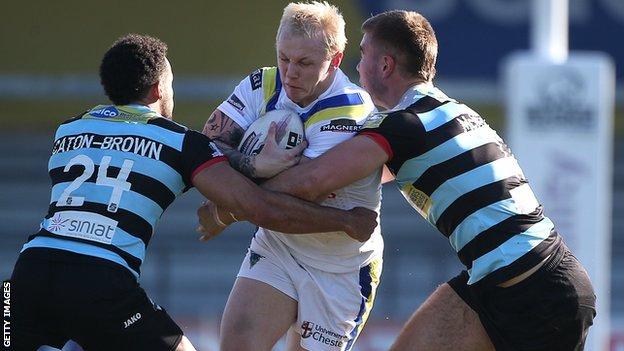 Rhys Evans ran in four tries as Warrington fought back to beat the winless London Broncos.

Wolves' Roy Asotasi opened the scoring, only for London to race to a 16-6 lead after 23 minutes with Nick Slyney, Ben Farrar and Thomas Minns touching down.

The visitors recovered with tries from Chris Bridge and Evans reducing the half-time deficit to two points.

Gene Ormsby then put Wolves ahead, with Evans grabbing a second-half hat-trick and Ryan Atkins touching down twice.

Victory is Warrington's second of the season, and most convincing after overcoming Hull FC 18-16 last week.

Asotasi put the Wire in front inside three minutes, taking a short pass from Ben Westwood to crash over.

The little-fancied Broncos, on the brink of collapse in December and rebuilding at their new home at the Hive, then stunned the visitors with Slyney muscling over from close range before Farrar snuck over in the corner to put the hosts ahead on 16 minutes.

It took us a little bit of time to come to terms with the narrow pitch, and the way London played, but in the second half I was pretty pleased

Minns then rose to grab a Scott Moore cross-kick before burrowing over for the Broncos third try.

Bridge showed great strength in the corner to pull a try back for last year's beaten Grand Finalists, and the centre then set Evans free to ease over before the break.

Ormsby shrugged his way through some weak tackles after claiming a sloppy Mike Bishay kick to put Warrington in front immediately after half-time.

Bridge and Atkins linked up to send Evans over for his second try before Broncos pair Jamie O'Callaghan and Minns both spilled chances to reply for the dogged hosts.

Michael Monaghan broke to put Atkins through for his first try of the game, which was followed three minutes later by Evans sprinting away for his third.

The winger was equally sharp in tight space, squeezing over for his fourth after Bridge was held short of the line.

And with the final play of the game, Atkins intercepted a Farrar pass to run the length of the field to complete a resounding victory for Tony Smith's side.

"We came prepared for a tough game and that is what London gave us.

"Once we started playing with the intensity and speed in the second half we were going to be fine.

"It took us a little bit of time to come to terms with the narrow pitch, and the way London played, but in the second half I was pretty pleased."

"I was really unhappy with how we played in the second half.

"I did not think we applied ourselves in the right way. Too many players were thinking about the scoreboard, rather than carrying on what they had been doing.

"We were looking to win the war, but Warrington made sure they won all of the battles, and that is how you win the war.