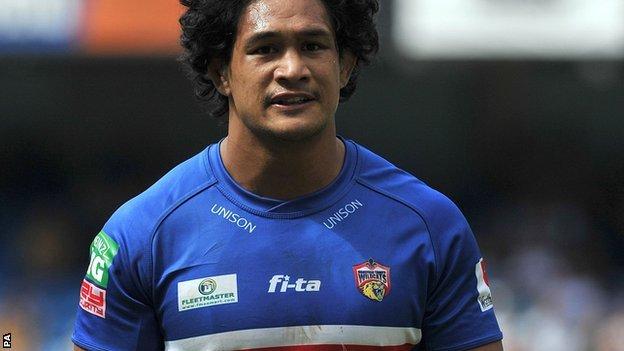 Wakefield thrashed Catalan Dragons to earn their first win of the season.

Taulima Tautai and Reece Lyne ran in two first-half tries each, with Jon Molloy also going over as the Wildcats stormed to a 32-0 lead at the break.

Pita Godinet then ran in a brace, before the Dragons replied with Elliott Whitehead scoring the first of his two tries and Leon Pryce touching down.

Wakefield scored more points against the French side than they had managed in their opening three defeats by Salford, Bradford and Wigan combined.

I am very embarrassed for the club. The club, the board members put a lot of effort in and they don't deserve where we are at the moment

Sammut teed up a penalty kick to make it 8-0 with Tautai then showing pace and power to go over again before playing provider for Molloy with a forward-looking pass.

Paul McShane then put a kick in behind the visitors defence for Lyne to make the most of.

Sammut's kick-chase and resilience to come up with a strip then had Lyne going over for his second before the break.

Godinet ghosted through the Dragons defence to score the first try of the second half and the Samoan then intercepted a Pryce pass to storm away for a 100m effort in the corner.

Slick handling set Whitehead up for the visitors' first points and Pryce stepped his way through to add a semblance of respectability to the score.

However, McShane's grubber kick then sent Smith over and Sykes got on the end of Richie Mathers' pass to emphasise the home side's dominance.

Whitehead's second try was of little consequence as the Dragons slumped to their fourth Super League loss of the season.

"People were building this as a four-pointer but I wasn't getting too upset about the defeats and I'm not getting too carried away on this win either.

"It's how you perform over 27 rounds - let's say we got a win next week (against London), you're in the play-off positions, but it's stupid to talk either way at this moment in time.

"People need to be looking at it a bit further down the track."

"The most worrying aspect is defensively we've played like a team in the French competition.

"I am very embarrassed for the club. The club, the board members put a lot of effort in and they don't deserve where we are at the moment.

"It's up to us as staff to take that (the latest defeat) on the chin and stand up."