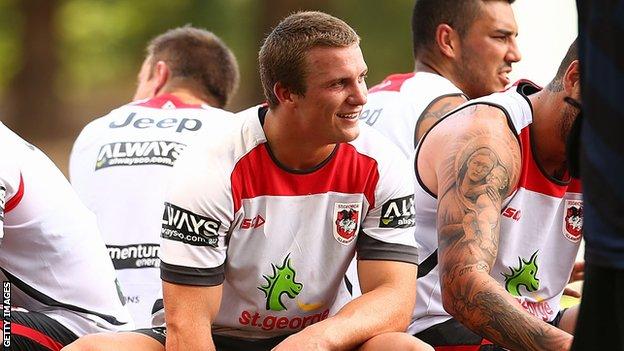 Australian Josh Drinkwater says the chance to be influential for London Broncos attracted him to the club.

The 21-year-old half-back joined from NRL side St George Illawarra Dragons last week and made his debut on Sunday.

He told BBC London 94.9: "To have the opportunity to control this team and be the dominant play-maker is something I am really excited about.

"It's my job to talk and direct the boys around. That will never be an issue for me. I back my own ability."

He added: "I want to play Super League week in, week out and that was one of the main reasons why I came over.

"I've signed here for one year and want to help the London team win as many games as possible and probably avoid relegation.

We are a young squad but have a lot of potential. It's about getting the boys confident and backing their own ability

"After the contract is up, we'll see how we go and what happens after that."

Drinkwater, who made four appearances for the Dragons in the NRL last season, started his first match for the Broncos in the 25-12 defeat to Bradford Bulls at Odsal last weekend.

He featured alongside fellow half-back Ben Farrar, who was also making his first appearance for the Broncos.

"I was happy to come here and play straight away," Drinkwater said.

"It all happened pretty fast but I am starting to settle in and get used to the time difference."

The Broncos, who have a vastly remodelled squad after coming close to entering administration in the off-season, have lost their first three Super League games this season.

Drinkwater does not believe that the north London side should be written off as no-hopers or certainties for relegation.

"Ben has played quite a bit of NRL as well and is experienced and smart, while Scotty Moore is a quality hooker," he said.

"We have some quality players around me to help me out there.

"I want to play good, attacking footy. I want to give them early ball and get them to do their thing.

"We're a young squad but have a lot of potential. It's about getting the boys confident and backing their own ability.

"Once we do gel, I think we will surprise a few teams."