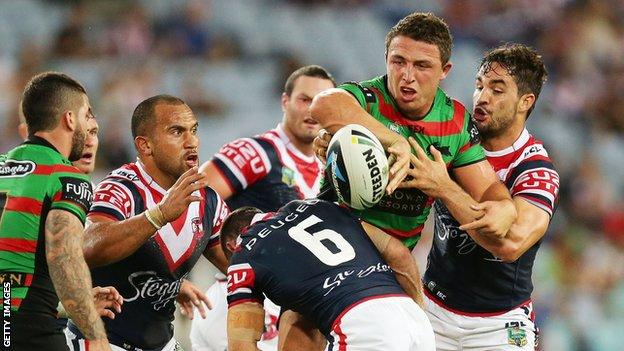 "If he keeps performing like that, we're in for a good year with Sam," Maguire told BBC Radio Manchester.

"I'm glad he's on our team this year," continued the former Wigan Warriors coach. "He's very focused, and as much as there's a lot going on in the outside world, we're pretty shut down on the inside.

"Sam just loves playing footy and I know he's going to put everything into this year because he does love this club."

Burgess agreed a three-year contract with Bath, who lie third in the Premiership, in February and wants the opportunity to play for England at the 2015 World Cup.

He started alongside younger brother George against the Roosters, while older sibling Luke appeared as a replacement.

Thomas, the fourth Burgess brother currently playing for South Sydney, missed their NRL opener because of a foot injury.