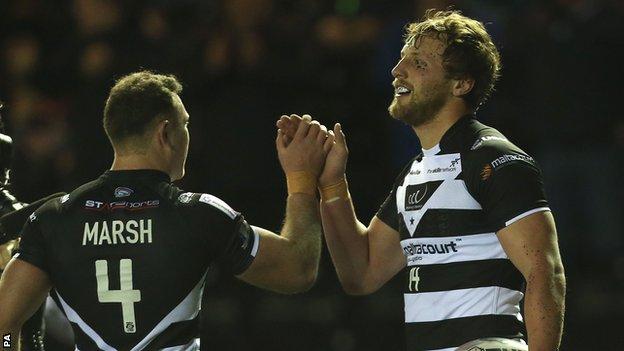 Coach Denis Betts praised his side's resilience after Widnes came from behind to beat Salford.

The Vikings won 32-18 on Thursday, adding to victories over London Broncos and Huddersfield Giants, to maintain their 100% start in Super League.

Widnes had produced a similar fightback to defeat the Giants six days earlier.

Six of the best

Widnes have won their last six fixtures in Super League - a run stretching back to August 2013.

The Vikings are one of four clubs to have won their first three matches of 2014 - the others being St Helens, Castleford and Leeds.

"I'd like to get to a situation where we don't have to do that, but you see a resilience and a character that will hold us in good stead," said Betts.

Widnes are one of four clubs - along with St Helens, Castleford and Leeds - to have won their first three fixtures in 2014.

After hammering London in their opening fixture, they turned around an eight-point deficit to beat Huddersfield on 28 February and trailed twice against the Red Devils before racing to victory in the final 20 minutes.

"I know it sounds like a cliche, but we just keep turning up week after week wanting to put in a solid performance and being committed to what were trying to achieve."