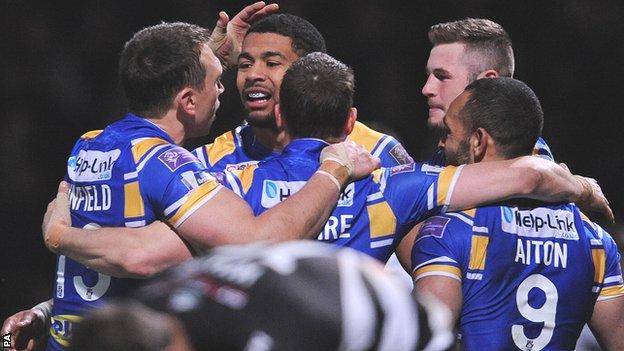 Winger Jones-Bishop went over twice in six first-half minutes as the hosts led 10-0 at the interval.

Kevin Sinfield also went over and added 10 points with the boot, while Rhys Hanbury scored a late try for Widnes.

An early injury to Joel Moon saw him replaced by Jones-Buchanan, with Carl Ablett moving to centre on his 200th appearance for the Rhinos, who remain unbeaten this term.

The game's opening try was well worked by Leeds as Zak Hardaker set up Jones-Bishop in a right-to-left move, with Sinfield putting the conversion attempt just wide.

Another great move saw Jones-Bishop go over for his second try. Hardaker and Watkins combined for the academy graduate to step inside and touch down, with skipper Sinfield this time landing the kick at goal.

Widnes had more of the ball as the half drew to a close but Leeds went to the break with a 10-point advantage.

Leeds were able to claim Sinfield's kick to get the second half under way successfully and start an intensive period of pressure.

It resulted in a fine individual try for Watkins, who side-stepped two tackles to go over and then a strong carry by Brett Delaney set Bailey free for his first try of the season, with Sinfield converting both.

The England captain then missed a conversion from his own try, when Jones-Bishop unselfishly gave up a chance of his hat-trick, but Sinfield was more accurate soon after when Burrow crossed for a sixth Leeds try.

Hanbury ran in the visitors' only try with six minutes to go, but it was little consolation for Denis Betts' side, who fell to a first defeat of the season and also lost in-form half-back Joe Mellor to a dislocated shoulder.

"I thought we showed a lot of defensive resilience and enough offensive composure.

"Widnes always looked like they would get in the game and to keep them to four points is a good one."

"It's a tough scoreline. We were second best. It was a tough first half and the character that Leeds showed stopped us from scoring.

"We came in at half-time and knew we were going to have the wind behind us and we felt we could build some pressure.

"But the quality of Leeds showed and that's probably the best they have played this year. Some of the tries they scored were fantastic."