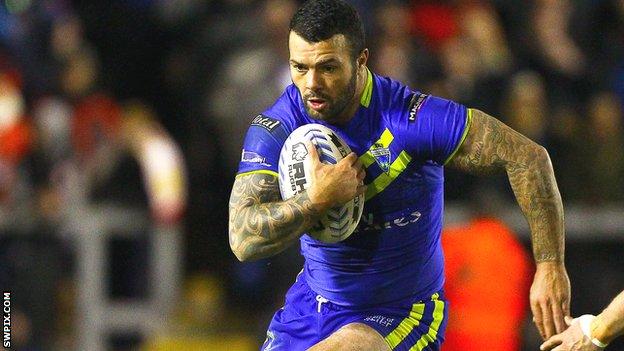 Bridge, Micky Higham and Gene Ormsby all crossed to give the Wolves a 16-4 lead at half-time, with new signing Dom Manfredi replying for the home side.

Joel Monaghan and Roy Asotasi added further Wire tries in the second half.

Manfredi added his second try and Greg Johnson also scored for Salford, who have now lost three games in a row.

A century for centre Bridge

Chris Bridge has scored 90 of his 100 career tries for Warrington. Four came for Bradford, one for Ireland, two for England and three for Super League's Under-21 side.

Bridge took advantage of Salford's failure to clear Gareth O'Brien's kick to open the scoring before hooker Higham dashed over. Young winger Ormsby crossed after another O'Brien kick bounced off a post.

But it was Warrington, beaten Grand Finalists in each of the last two seasons, who struck next when England duo Ben Westwood and Richie Myler combined to send Monaghan over.

"The honeymoon period is over and we did some silly things. We shot ourselves in the foot and didn't make the start we wanted.

"The effort was good but we have to make sure we go in the right direction. We made too many errors and need to play smarter.

"We had six goes at them and scored three tries, but their kicking game was better than ours and that was the main difference. We didn't quite handle their ruck speed either."

"We had to be patient and showed real maturity out there. I enjoyed our patience but I'm glad we created opportunities.

"We stayed down their end and put them under pressure without trying to score on every set and play."