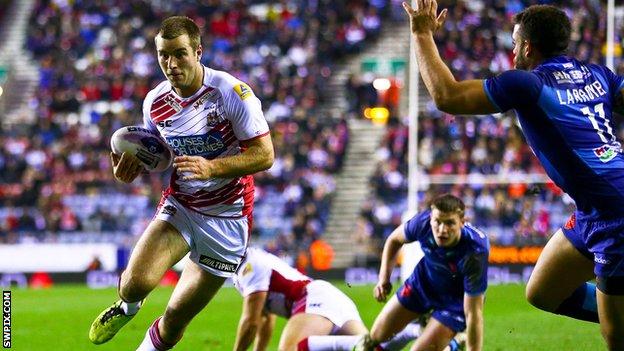 Iain Thornley scored a hat-trick of tries as champions Wigan claimed a hard-fought success over Hull KR, whose winless start to the season continued.

After early Wigan tries from Thornley and Matty Bowen, the visitors replied with unanswered scores from Jamie Langley, Liam Salter and Kris Welham.

But Liam Farrell and Ben Flower both crossed for the Warriors before Thornley completed his treble.

Wigan have now won their last 13 fixtures against Hull KR, a run that stretches back to May 2009

Although Wigan were able to register a second win of the season, the game was in the balance until Matty Smith's late penalty added some extra insurance in the closing stages and centre Thornley struck for a third time.

Coach Shaun Wane will know his team must make a big improvement if they are to successfully defend their Super League crown, even if they did not appear to be missing injured captain and England international Sean O'Loughlin in the opening minutes.

Thornley's expert finish under pressure and full-back Bowen's length-of-the-field effort put Wigan 8-0 ahead, but Hull KR took advantage of some suspect defending to take a six-point lead into the break.

He's got a lot of potential and I think we've seen it. He needs to string 10 or 12 games together like that

Thornley jinked his way through for his second of the match but another Wigan error, this time a knock-on by prop Jordan James, led to winger Cockayne's first try for the Robins since returning to the club from Wakefield.

Both teams had tries disallowed either side of the interval, before Farrell rounded off a swift Warriors break to level the scores at 20-20 early in the second half.

The hosts took the lead when the visitors gave away two penalties in quick succession and loose-forward Flower received Smith's pass to dive over, and captain Smith added another two points with a penalty before Thornley touched down Blake Green's kick to seal the win.

"I thought it was the best game he [Thornley] has had. He carried the ball strong and defended well.

"He's got a lot of potential and I think we've seen it. He needs to string 10 or 12 games together like that.

"I thought we defended dumb in the first half. There were a few technical things we needed to fix up and we did.

"To nil a quality team [in the second half] was quite impressive. I'm happy with that win."

"We had a couple of real good opportunities in the second half and didn't take them.

"Wigan, to their credit, took every one of theirs and that was the difference between the two sides.

"There were a lot of positives. We competed a lot harder and scored some classy tries."