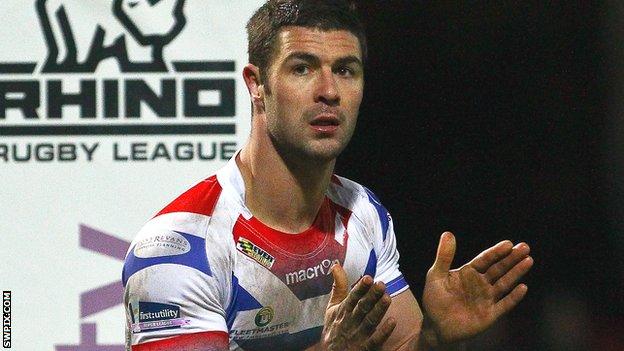 Thomas Minns, Denny Solomona (2) and Matt Cook replied for London, who have lost all five league games in 2014.

Tony Rea's Broncos are only being kept off the bottom of the table by Bradford's six-point deduction for entering administration.

After losing their first three matches of the season, Richard Agar's Wakefield responded with a convincing victory against Catalan Dragons on 9 March and ran in 50 points for the second week in succession.

Two breaks down the right touchline led to the first two tries for Mathers, and although home centre Minns hit back with a score under the posts, half-back Sammut grabbed a loose ball to restore the visitors' 12-point lead.

Smart offloads set up tries for Wakefield's two centres Collis and Lyne as the Wildcats took a 30-6 advantage into the interval.

Mathers completed his hat-trick with a mazy run early in the second half, but Wakefield were penalised for obstruction soon afterwards and Solomona touched down London's second try of the afternoon.

Collis and Godinet added further scores for Wakefield, while Solomona and Cook made the result slightly more respectable for the hosts.

Fittingly, the experienced Mathers rounded off the scoring with his fourth try in the dying seconds.

"Scorelines against us like this will not break us, they will mould us. I know people will be down on us after this, but we are not down on ourselves.

"We just need to harden up a bit. We gave them a significant number of their points today through handling errors and mistakes and if you take that away it would be very different."

"For two weeks running we have racked up 50 points and that takes some doing. It shows that we have some real promise as an attacking unit.

"We played it simple and we punched holes in their defence, and some of the tries we scored were created by great bits of skill.

"We have had some tough times, but we have come out the other side better for it. There are still lessons for us to learn, but I am really pleased with a lot of what we did today."