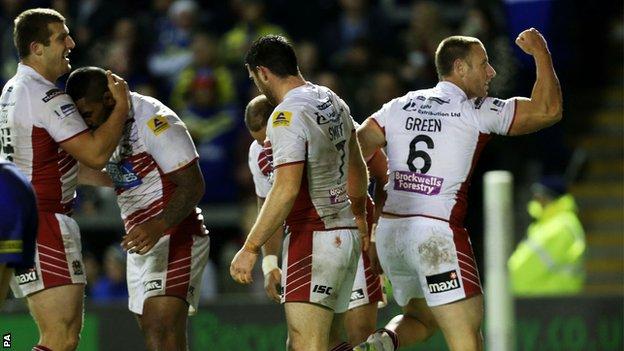 Liam Farrell's try and two successful kicks at goal from Matty Smith put the Warriors 8-0 up at half-time.

Gene Ormsby crossed for the home side but they could not mount a comeback and lost for the first time in four league outings.

Victory for Wigan, meanwhile, takes them level on points with the team they defeated 30-16 to lift the Super League crown at Old Trafford last October.

A strong rivalry has developed between the two north-west clubs in recent seasons, intensified by claims that the Wolves assisted NRL champions Sydney Roosters in the build-up to February's World Club Challenge success over the Warriors.

Wigan centre Darrell Goulding almost profited from a lapse in concentration early on, failing to grasp cleanly in the slippery conditions after pouncing on a loose ball near Warrington's try line.

But the visitors did go ahead went Matty Bowen's pass sent Joe Burgess clear down the left touchline and the young winger fed second-rower Farrell to coast over unchallenged.

John Bateman and Iain Thornley both thought they had extended the advantage with tries, only for the officials to intervene on both occasions.

Wigan had to be satisfied with a penalty from Smith, awarded after Ryan Atkins had illegally blocked the half-back's run off the ball, in the dying seconds of the first period.

The double winners did not have to wait long for a second try, with Farrell turning provider and giving Green - the man of the match in last season's Grand Final - a free run to the line 10 minutes into the second half.

After making several handling errors in attacking areas, the home side got the break they needed on the hour mark when Bowen's misplaced pass out wide was intercepted by Warrington winger Ormsby, who raced in from 40 yards.

It gave the Wolves hope but they rarely looked like closing the eight-point gap any further and Wigan held on for a hard-fought victory.

"Without the ball, we were as physical as I've seen my team for a long time and that's a real positive to take from it.

"With the ball, we were dreadful.

"We were way off with our kicking game. Some areas that we were very good at last week [at Salford], we certainly didn't build on that this week."

"I thought we defended really well. We really deserved that and were well deserved winners.

"All credit to Warrington because they stuck at it. This is a tough place to come but we were very good in difficult conditions.

"It was a pleasing win, in bad conditions, against a very good team. It was a good effort."