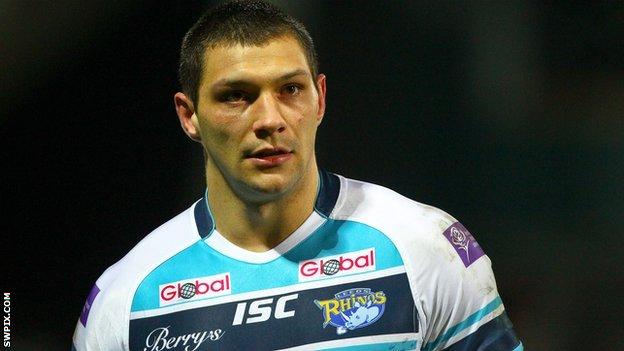 Brad Singleton, Mitch Achurch and Ben Jones-Bishop also touched down, adding to Hall's trio of tries, to lead 34-0 at the break at Headingley.

Zak Hardaker's sixth successful kick was to convert his own try before Mason Caton-Brown replied for London.

Kallum Watkins then crossed for Leeds and set Jones-Bishop up for his second, while Rob Burrow completed the rout.

Leeds, who remain unbeaten having won five and drawn once this term, will be overtaken at the top of the table by both Castleford and St Helens if they both maintain their perfect records on Sunday.

In the absence of Kevin Sinfield, who was rested for the first time since 2009, Rob Burrow captained Leeds on his 350th Super League appearance

Tony Rea's Broncos, who have the worst defensive record in the competition having conceded 281 points in six games, are only being kept off the bottom of the table by Bradford's six-point deduction for entering administration.

For London, who lost forward Atelea Vea with a suspected spleen injury in only his second Super League appearance, it was damage limitation from the start.

The game was only 84 seconds old when the beleaguered Broncos conceded their first try, as Danny McGuire sent Singleton over with a grubber kick after the visitors relinquished possession from the kick-off.

Hall, who signed a new five-year deal with the Rhinos earlier in the week, then showed power and poise to score the next two tries, first muscling over in the corner before reading a McGuire kick to cross again soon after.

The video referee denied London a response with Mike McMeeken held up by Hardaker.

Achurch linked up with Paul Aiton to charge over from 10 metres, before England international Hall got on the end of a Burrow kick to complete his treble.

Winger Jones-Bishop then finished off a 70-metre move sparked by full-back Hardaker, who then dummied his way over after the break.

London's perseverance was rewarded on 49 minutes when centre Caton-Brown found a gap in the Leeds defence to score his side's only try, which Josh Drinkwater converted.

Caton-Brown did well to then deny Carl Ablett a try after Burrow had burst down the middle, and while Watkins squandered a golden chance, he later sliced through the Broncos defence for Leeds' eighth score.

He then put Jones-Bishop through and Burrow went on to mark his 350th Super League appearance by converting his own try late on.

"I didn't think we ran through London with ease - I thought they were dogged throughout.

"We were too fast maybe in the outside backs, but I don't think physically we blew them off the park and credit to London for that. They gave us a bit of a test.

"We were so focused because we didn't want to be the first team to get beat by them.

"What a career Rob [Burrow] has had and what an influential player he has been.

"The role he plays with us, he adapts it here and there, but he's still very effective and that last try he scored he has been doing that for years. Those jinky little runs are hard to defend."

"I'm not really interested in a hollow victory in the second half.

"We're not kidding ourselves. We don't want pats on the back for being a little bit better than bad.

"We came here to do a job and we didn't do it. I'm really disappointed with what we came up with tonight."