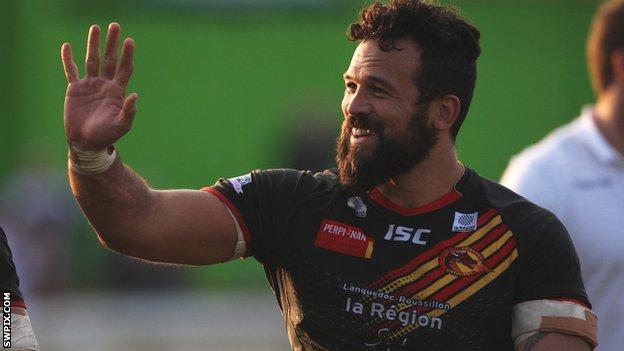 Catalan Dragons claimed their first Super League win of the season with a 30-14 victory over Huddersfield Giants.

Tries from Zeb Taia and Louis Anderson gave the hosts a 14-0 half-time lead.

The French side had lost their previous eight competitive matches, a run that stretched back to August 2013.

A dreadful start to the season saw several senior players summoned for crisis talks, after which they produced a positive display in defeat at leaders St Helens.

Drought ends for the Dragons

But a convincing first win of the campaign, against a Huddersfield team that lifted the League Leaders' Shield in 2013 and had previously lost only once this term, is sure to be a huge boost to Catalans and coach Laurent Frayssinous.

The visitors started brightly in wet conditions but were denied a first try when Leroy Cudjoe's effort was ruled out and they were punished when the hosts scored twice in quick succession.

Centre Taia burst through a gap to touch down from close range and Anderson crossed in similar fashion soon afterwards, although there was a lengthy delay before the video referee ruled that the second-rower had grounded the ball correctly.

Thomas Bosc converted both tries and added a penalty for a 14-0 lead, while Jermaine McGillvary's last-ditch tackle to deny Escare prevented further damage before the interval.

Any hopes of a Huddersfield comeback were dashed early in the second period when a swift attacking move saw Anderson - who was back in the side after suspension - cruise in for his second try under the posts.

When Escare darted over after good work from winger Mathias Pala, the Dragons could finally celebrate a long-awaited success.

Grix's opportunist try and a powerful effort from England international Ferres added some respectability to the scoreline but Whitehead capped an impressive display with a fifth Catalans try, with Broughton's late score for Huddersfield merely a consolation.

"I'm very pleased with that performance. Huddersfield didn't score points against one of the worst defences in the comp for 65 minutes - I'm really happy with that.

"Defence is an attitude and tonight the boys showed some attitude, so I'm really happy with that.

"Eloi Pelissier has played 80 minutes in the last two games and he's growing as a player, you can see that.

"He has a good motor and created a couple of tries for us tonight and played well in defence.

"Louis Anderson gave us strength on our edge and Olivier Elima returned in the middle to help firm us up and Elliott Whitehead did a lot of work for us on his side of the field.

"I'm really happy and really pleased by the way the boys worked for each other and their team-mates tonight. I always believed that this squad and group of players could turn our results around and it's particularly pleasing for us to do it against the team who were league leaders last season."

"I thought we were out-enthused in a lot of areas tonight, we came up against a very hot and very committed Catalan team.

"It's always a tough ask coming over here but we didn't do ourselves any favours.

"I thought Catalan as a whole were very dominant in all areas and we were out-enthused in many areas which is more of a worry for us.

"We've picked up a few bumps and bruises and a few 'feel sorry for me' injuries.

"We showed what we can do and what we are capable of when we decide to play and that has to be the key for us, making the decision to play rather than waiting for teams to do what Catalan did to us tonight."