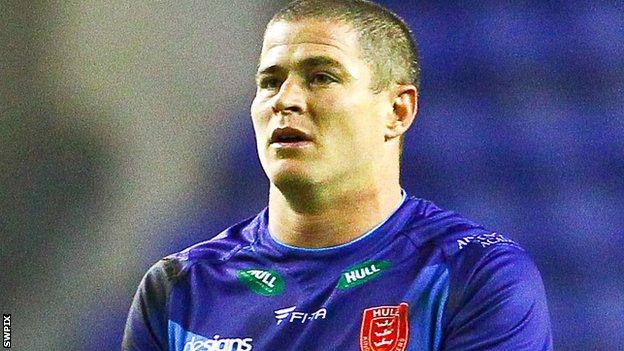 Hull KR eased the pressure on boss Craig Sandercock with a first win of the Super League season against bottom club Bradford.

The Bulls defence showed heart in the second period but Burns kicked through for Kevin Larroyer to touch down.

The result lifts Hull KR up to 11th and leaves London Broncos as the competition's only winless side.

It was a much needed boost for Sandercock, whose side's only other point this term had come in a draw at Huddersfield last month.

In fact, only Bradford's six-point deduction for going into administration has prevented the Bulls from not being above their opponents, after recording two victories themselves.

The visitors rarely threatened going forward though, particularly after losing hooker Matt Diskin and prop Adam Sidlow to injuries as early as the 11th and 25th minutes respectively.

It was 60 seconds after Diskin's withdrawal that Rovers took the initiative, with Bradford failing to deal with Burns's kick and Caro picking up the pieces to touch down, with the former getting the extras.

Burns would end up playing a part in all of his side's tries and, along with half-back partner Keating, was easily able to dictate play.

The pair combined for Hull KR's second, as Burns broke through a tackle and fed Keating on the inside for the finish near the posts.

Burns kicked the conversion to establish a 12-0 lead going into the break.

And while Bradford struggled to create any forward momentum, they generated a stubbornness in front of their own line in a bid to deny the hosts an escalating score.

Several times Rovers thought they had clawed over the line only for a Bulls player to get underneath the ball.

It took 40 minutes, but the third try finally came, Burns again the creator as his grubber kick ran perfectly for Larroyer to cross.

Burns missed his conversion attempt, but his influence had already been felt as Hull KR look to put their poor start to the season behind them.

"It was pleasing to win. But more importantly we performed for the full 80 minutes.

"I don't think we've kept a side scoreless for a couple of years.

"The boys can be proud of themselves for that.

"We got held up four or five times. You can usually count on one or two of those being scored.

"Conditions weren't great and some of outer executions still wasn't where we want it to be.

"But overall we dominated that game and it was good to get the win."

"They showed great character after last week and we worked hard for each other with the amount of field position Rovers had.

"We came up with some great try-saving tackles and that's something we can build on.

"We showed great desire and work ethic but we came up with too many errors."