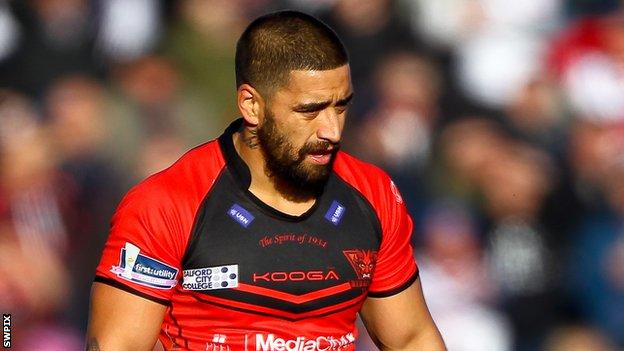 Martin Gleeson and Greg Johnson both crossed as Salford started brightly, only for Cas to reply through Justin Carney before half-time.

With Chase's influence growing, Andrew Dixon touched down twice, but Tigers kept the pressure on with tries from Weller Hauraki and Luke Dorn.

Cas hopes of a late comeback were ended though when Chase landed a drop goal.

Rangi Chase and Marc Sneyd were on opposite sides of the fence last season.

Chase joined Salford from Castleford on a permanent deal in the summer.

And Red Devils stand-off Sneyd has impressed so far during his season-long loan at Cas.

Salford have struggled since losing Chase to a leg injury in their season-opening victory over Wakefield, having lost their last three games, while Castleford have seemed unruffled by the departure of the England man in the summer, winning all of their first five fixtures.

But the stand-off proved to be a catalyst upon his return to the Red Devils starting line-up,

Castleford barely touched the ball in the opening stages, let alone completed any sets, and the Red Devils could have been out of sight within 20 minutes.

As it was, their early dominance would only return two tries, with Gleeson finding yards of space in the inside-right channel to go over and then Johnson, with Castleford too preoccupied with the threat of Chase, receiving the ball through the hands to touch down, although Jake Mullaney would kick only one of his two conversions.

For all their possession, Salford failed to strike a killer blow and Cas, slowly emerging into the game, were on the scoreboard with their first meaningful attack as Michael Shenton fed Carney to cross in the corner and allow Marc Sneyd to collect the extras.

With handling errors proving rife throughout both teams, Mullaney thought he had pulled Salford further in front, but was brilliantly held up by the Tigers defence just short of the line, while Jake Webster should have done better at the other end when he opted to pass rather than take it on.

Chase continued to pull the strings after the break, timing a pass perfectly for the onrushing Dixon, who crashed the ball down.

Mullaney popped over the extras and then turned provider, feeding an inside ball for Dixon to land a quickfire second, taking advantage of Adam Milner's spell in the sin bin for obstructing Theo Fages. Full-back Mullaney once again put his kick through the posts.

The Castleford response kicked in though, with Daryl Clark's industry freeing up Hauraki for a score and then Dorn speeding past Mullaney to put his name on the scoresheet.

Sneyd, on loan from Salford, knocked over the kick to bring Cas within a converted try of pulling level, but it was Chase who had the final say, finding the target with a drop goal to ease any late nerves.

"Rangi Chase controlled our left side with great discipline. Some people may have been expecting him to do flash things like make 60-metre dashes but you have to remember he's only played a few minutes this year.

"We should have been further ahead because we bombed a few opportunities. But I'm pleased for the players because a few things have been said.

"We are not out of the woods but will grow from this, beating a confident side who were top of the ladder.

"Shannon McPherson had his best game for us, Lama Tasi was strong and Andrew Dixon was exemplary. Adrian Morley also showed in his first stint especially what a big asset he will be alongside Tasi."

Castleford Tigers coach Daryl Powell on a woman coming onto the pitch towards the end:

"I wanted to join the lady to see what was going on.

"We were inconsistent today and so were the officials but we made too many errors in the first half that put us under pressure.

"It was the same at the start of both halves and I'm disappointed because we could have won it with 10 minutes to go.

"We looked the better side but then made the errors. Sometimes when you are unbeaten you know it's coming and it came today.

"We are going to have to deliver a better performance against London on Thursday."