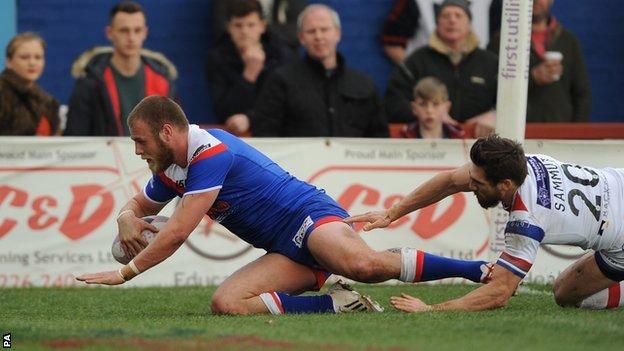 St Helens scored four unanswered tries in the second half at Wakefield to preserve their perfect Super League start.

Josh Jones muscled over in the corner for Saints' first points on 22 minutes, only for Danny Kirmond to hit back.

Jarrod Sammut put Reece Lyne through to make it 10-4 at the break before Paul McShane dummied to extend the lead.

Saints fought back through Sia Soliola, Matty Dawson, Joe Greewood and Tommy Makinson to go top of the table.

St Helens move ahead of the unbeaten Leeds Rhinos at the summit, and are now the only side in the competition with a 100% record following Castleford's 23-16 loss to Salford.

Wello did a good, solid job for us - he completes so hard whatever position he's in.

They extended their winning run to six games despite losing influential stand-off Lance Hohaia in the warm-up, having failed to prove his fitness after suffering a knock in last week's win against Catalan Dragons.

Instead, Saints boss Nathan Brown relied on the makeshift half-back pairing of Paul Wellens and Jon Wilkin, with a combined age of 64.

Wakefield started brightly with centre Jimmy Keinhorst having an early try disallowed for a forward pass, while prop Nick Scruton got over the line only to fail to ground the ball.

Kyle Amor, making his first return to Belle Vue after being sold to ease Wakefield's financial troubles, helped create the game's opening try, putting Jonny Lomax into space before William Manu and Makinson linked up to send Jones over.

Makinson was wide with his conversion attempt and Manu was held up over the line, only for Matt Ryan to then set Kirmond up for the Wildcats' response.

Sammut then swooped on a loose pass from St Helens hooker James Roby near his own line to burst away and send Lyne free, before then adding the extras.

Scrum-half Sammut was on target again when McShane grabbed his first Wakefield try, but the high-flying Saints replied in devastating fashion, running in four tries in 15 minutes.

Wellens combined with Wilkin to get second-rower Soliola over, then put in a kick for Dawson to touch down.

Wilkin put Greenwood through a hole to put the visitors back ahead as Makinson kicked his second goal and showed some aerial prowess to collect a Wilkin kick to the corner to land his side's fifth try.

Wakefield, subdued by the Saints fightback, lost skipper Kirmond to injury on 64 minutes and had second-rower Ali Lauitiiti put on report for a challenge on Lomax.

"We had a period where we touched the ball three times in 15 sets and it was during that period when they came up with four tries.

"My beef with my team is that we've got to be a little bit stronger and, when momentum is against us, we've got to work harder to break it.

"I'd like us to show a bit more resilience when under pressure and fatigued. Some times when things go against you in a game, you have to aim up that little bit harder."

"In the first half from an attacking point of view we didn't handle it so well, we were a bit disjointed.

"But they have a lot of threat across their team - they have scored 50 points in each of the last two weeks - and I thought defensively we handled them reasonably well.

"And in the second half I thought our offence improved enough to get us enough points to win.

"Wello [Paul Wellens] did a good, solid job for us - he completes so hard whatever position he's in."