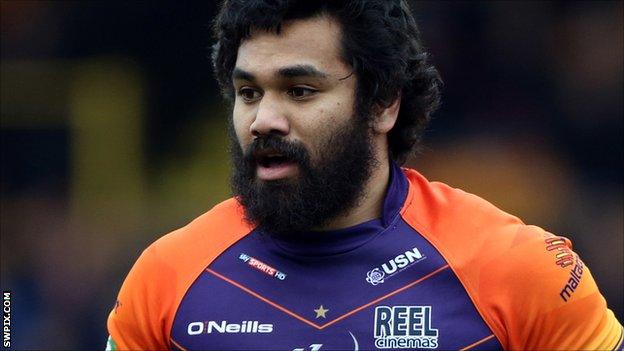 Patrick Ah Van scored the only try as Widnes Vikings earned a hard-fought win in difficult conditions at Hull FC.

Ah Van pounced on an opening-minute knock-on from Jordan Rankin to score the only points of the first half.

The video referee ruled against a Hull FC reply before half-time, with Jordan Thompson knocking-on over the line.

It is a crisis after that performance.

Kirk Yeaman failed to gather a Chris Tuson pass in what was a rare Hull FC chance, while Ah Van slotted a penalty before Tom Gilmor's drop goal.

Victory was Widnes' first away from home having lost their first match of the campaign at Leeds last week, while the defeat was Hull FC's fourth of the year and the first time in nearly three years that they have failed to score in a Super League match.

Black and Whites full-back Rankin spilled the ball on his first carry of the match, with Ah Van punishing the mistake by charging over.

Danny Tickle missed the conversion, but in driving wind and rain at the KC Stadium there were few points up for grabs and Hull sorely lacked a finishing touch as Widnes spent much of the first period pinned back on their own line, with Phil Joseph and former Hull man Tickle leading a strong defensive showing.

Thompson's failed effort epitomised the fortunes of Lee Radford's men, having burst through the Vikings defence only to spill the ball as he crossed over.

The 7-0 loss to Widnes is the first time Hull FC have been kept scoreless in the Super League since their 20-0 loss to Leeds on 15 July, 2011. However, they also failed to score in the Challenge Cup Final against Wigan at Wembley last year.

When Widnes fumbled the ball inside their own half after the break, opportunity beckoned for Hull FC with a huge overlap on the following play.

However, Yeaman managed drop the ball with Widnes seemingly caught short in defence.

Successive penalties enticed Ah Van to tee up a penalty from right in front of the posts, but he failed with a second, longer distance attempt soon after and Gilmor put the game beyond doubt with a drop goal late on.

"It is a crisis after that performance. You base your pre-season around not performing like that and turning efforts like that in.

"You don't want to turn performances like that in against teams we're expected to beat at home, especially with the calibre of squad we have.

"I don't want to be associated with those performances, and it's not a nice feeling at all.

"We've got a five day turnaround and when we watch the video - and have our first crisis meeting of the season - they've got to ask themselves why they put that shift in as individuals.

"There's nothing to take out of that game whatsoever.

"The performance we spoke about pre-season that we want to get out of our DNA, they threw that in today. It's old habits from the same blokes and you wonder if it is ingrained in them."

"I would have been disappointed if we'd lost the game, I thought we deserved the victory.

"We created opportunities and we worked hard to stop them scoring a couple of tries, too. They had some good chances to get points on the board, but we worked well together.

"We've had 100 points scored against us in two years here. When you look at what we've done in the last two years at Hull FC, to come here and win with a zero on the scoreline - with just two or three changes in the team - is a massive pat on the back to the lads."